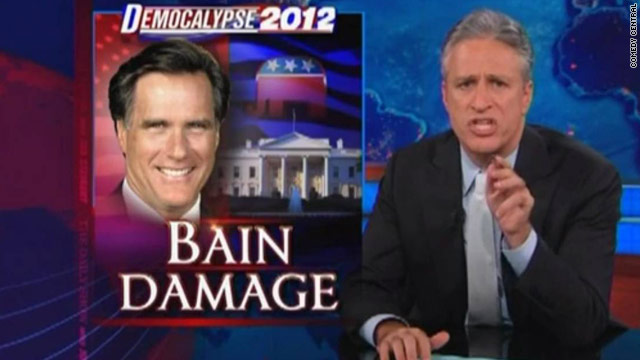 (CNN) - "Daily Show" host Jon Stewart returned to his set after a two-week vacation just in time to hammer Republican White House hopeful Mitt Romney over new questions about Romney's tenure at Bain and renewed calls for him to release more of his income tax returns.

Stewart struck upon a remark senior Romney adviser Ed Gillespie said Sunday on CNN's "State of the Union," when he told chief political correspondent Candy Crowley that Romney "retroactively retired" from Bain Capital while he was heading the 2002 Salt Lake City Olympics.

"I'm not saying that if you have a time machine you necessarily have to kill Hitler. But this retroactive retirement is the worst use of a time machine I have ever seen," Stewart joked.

The host delved further into reports stating Romney was listed as Bain's CEO after 1999, when the company invested in companies that outsourced jobs overseas. Stewart mocked the confusing explanation Romney's team has offered, which is that the GOP candidate was merely listed as the firm's CEO but didn't have a decision-making role.

"'I was just the guy with the smoke-screenish yet still-legal title of CEO and managing director who was paid at least $100,000 a year to do what according to me, Mitt Romney, was nothing,'" Stewart said. "'That's the kind of common-sense business experience I hope to bring to the White House.'"

What would clear up confusion, Stewart said, would be "quick look at Romney's tax returns from the last 10 or 12 years."

Romney, of course, has said he will release only two years of tax return information, despite calls from Democrats and some Republicans to release more.

"Just the two years when you knew you were running for president," Stewart said. "Nobody gives a [bleep] about those two years. It would be like if the Keith Richards autobiography was called 'My Years as a Movie Pirate.'"

Stewart finished with an assessment of Romney's stance, saying the candidate doesn't understand that "nobody cares that Mitt Romney is rich."

Stewart continued, "It's Romney's inability to understand the institutional advantage that he gains from the government's tax code largesse, that's a little offensive to people, especially considering Romney's view on anyone else who looks to the government for things like, I don't know, food and medicine."