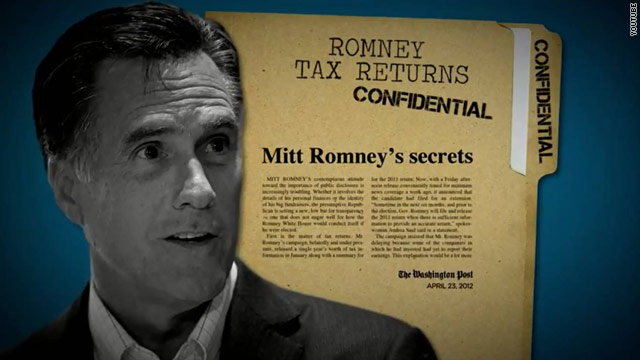 The 30-second spot, “Makes You Wonder,” will run in Pennsylvania the same day Romney travels to the Keystone State.

“Mitt Romney has used every trick in the book” when it comes to his financial portfolio, the ad’s narrator says. It points to reports of Romney’s offshore investments in places considered to be tax havens for Americans.

Obama’s re-election team and national Democrats have inundated Romney with attacks in recent weeks over his finances, calling on the presumptive GOP presidential nominee to make public additional tax documents to answer any lingering questions.

Romney has released his 2010 tax return and an estimate for 2011. He has pledged to release the full return once it's available.

“The ad raises questions about whether Mitt Romney has avoided paying his fair share in taxes,” Obama press secretary Ben LaBolt said in a statement.

He continued: “Until he releases additional years of tax returns, the American people won't know why he kept his finances offshore in the Cayman Islands and set up a shell corporation in Bermuda.”

The ad marks one of several in recent weeks targeting Romney over the issue.

The former Massachusetts governor has firmly stated that he will not be releasing any more tax documents, pointing to the fact that he has already met federal election law by releasing annual financial disclosure reports as required.

"The Obama people keep on wanting more and more and more, more things to pick through, more things for their opposition research to try and make a mountain out of and distort and to be dishonest about," Romney said Monday morning on Fox News.

He has previously stated that he has never been in violation of tax law, highlighting the fact that his accounts are managed in a blind trust and says he’s unaware of where his money is placed.

“That trustee follows all U.S. laws. All the taxes are paid, as appropriate. All of them have been reported to the government. There's nothing hidden there," the candidate said last week on Radio Iowa.

On Tuesday, Romney attends a rally in Irwin, Pennsylvania, a state CNN rates as leaning toward Obama on its Electoral Map.

The Obama re-election campaign has spent slightly more than $3.5 million to run television commercials in Pennsylvania, according to data provided to their clients by Kantar Media/Campaign Media Analysis Group, which tracks political ad spending on broadcast and national cable TV.

Tuesday's new ad is running in the Pittsburgh area, according to CMAG, as well as in Toledo, Ohio on Wednesday, the same day Romney will be in nearby Bowling Green for a campaign event.