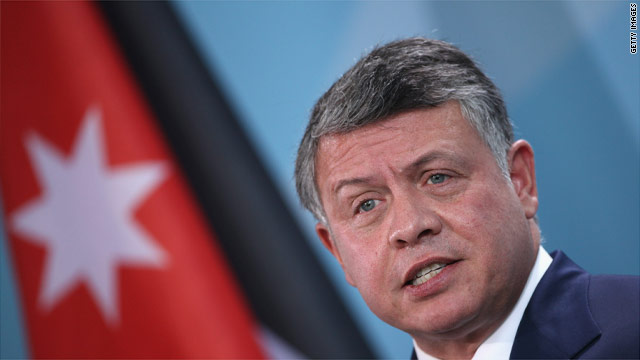 (CNN) – A little more than a week before Mitt Romney's overseas trip that includes a visit to Israel, Jordan's King Abdullah said he believes the presumptive GOP nominee understands that brokering peace between Israelis and Palestinians remains the top goal in the Middle East.

Speaking to CNN's Wolf Blitzer in an interview set to air beginning at 4 p.m. ET, King Abdullah said his meeting with Romney last year led him to believe the candidate has a solid knowledge of how important the peace process remains.

What are the differences King Abdullah sees between Mitt Romney and President Obama? Tune in Wednesday to "The Situation Room with Wolf Blitzer" at 4 p.m. ET on CNN to find out.

"Our job is to keep the discussion alive until the end of this year when American elections are finalized, depending on who wins of the two candidates," Jordan's leader continued. "That puts us in a better position to understand how to move the process forward at the end of next year."

During this election cycle, Romney has been harshly critical of President Barack Obama's handling of the U.S. relationship with Israel.

At the Republican Jewish Coalition in December, Romney took the president to task for not saying enough about the thousands of Hamas rockets fired into Israel, and for encouraging Israel to adopt what Romney called "indefensible borders."

"These actions have emboldened Palestinian hard-liners who now are posed to form a unity government with terrorist Hamas and feel they can bypass Israel at the bargaining table," Romney said at the forum in Washington. "President Obama has immeasurably set back the prospect of peace in the Middle East."

On its website, Romney's campaign lays out very broad strokes of a plan for Israel and Palestine, saying "Mitt's policy will differ sharply from President Obama's."

At a CNN-sponsored debate in Florida in January, Romney addressed the notion of a two-state solution that would result in an independent Palestinian state alongside Israel.