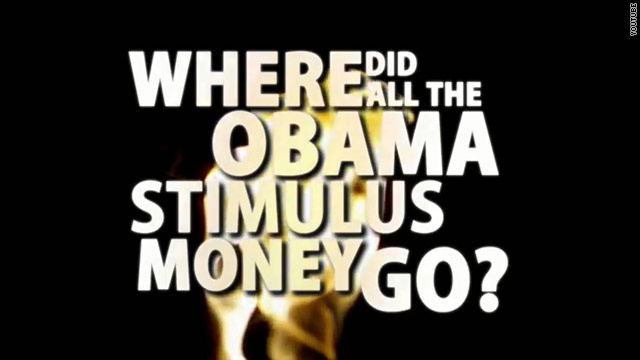 The 30-second spot, “Where did all the money go?” charges the president with sending taxpayer dollars to failed energy companies whose owners contributed to his campaign.

“Where did all the Obama stimulus money go?” the ad’s narrator says, against a backdrop of burning cash. “Friends. Donors. Campaign supporters. Special interest groups.”

The commercial specifically points to Solyndra, an energy company that went bankrupt after receiving a $535 million grant from the government under an Obama administration loan guarantee program for green technology manufacturers. It also highlights Fisker Automotive, another recipient of the loan program that announced major layoffs this year.

The ad ends with 2010 footage of Democratic Sen. Charles Schumer of New York announcing at a press conference that “79% of the $2.1 billion in stimulus grants awarded through it went to overseas companies.”

In a statement accompanying the ad, Romney’s campaign said Obama has “showered his friends with stimulus funds” and raised the question: “If we can’t trust him with our money, why should we trust him for another four years?”

Obama's campaign forcefully beat back the accusations, saying the Republican candidate is simply trying to distract voters from increased attention over his business record and financial portfolio.

"Mitt Romney's desperate to avoid answering serious questions about his tenure at Bain Capital and his investments in foreign tax havens and offshore accounts," Obama campaign spokeswoman Lis Smith said in a statement. "So he's joined his surrogates and allies in launching over-the-top attacks that independent fact-checkers and news organizations have said are 'flat out false,' 'wrong,' and use 'weasel words.'"

While Team Romney didn’t say where the ad would run, earlier this week it purchased $1.39 million worth of ad time beginning Thursday in the battleground states of Iowa, North Carolina and Virginia, according to a Republican media tracking source. That comes on top of a $5 million ad buy made last week in five additional swing states.

Romney will appear in one of those states – Ohio - on Wednesday, while Obama stays closer to home, in Washington, fresh off a campaign trip to Texas.

- CNN’s Kevin Bohn and Rachel Streitfeld contributed to this report.