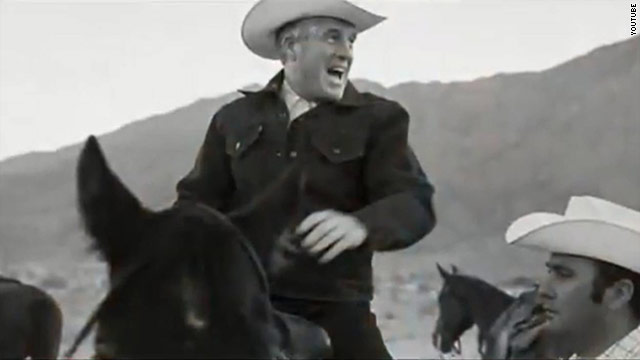 That's the beginning of the latest Spanish language television ad from presumptive GOP nominee Mitt Romney, who uses his youngest son to highlight his family's roots in Mexico.

Last week the campaign released another Spanish spot featuring Craig, who is fluent in Spanish, encouraging Latino voters to "get to know" his dad. The campaign said Wednesday's spot is their ninth Spanish language spot since January.

In the spot released Wednesday, called "Nation of Immigrants," Craig says his dad "values very much that we are a nation of immigrants."

He continued, "My grandfather George was born in Mexico. For our family the greatness of the United States is how we respect and help each other, regardless of where we come from. As President, my father will work on a permanent solution to the immigration system, working with leaders of both parties."

George Romney, who served as governor of Michigan from 1963-1969 and ran for the GOP presidential nomination ahead of the 1968 election, was born in Mexico to a Mormon family that fled from religious persecution in the United States. When the Mexican Revolution broke out, George Romney's family moved back to the United States.

Mitt Romney has largely avoided using his connection to Mexico in the 2012 presidential race, though he did make brief mentions of his father during campaign stops in Florida ahead of the state's January primary.

The presumptive GOP presidential nominee faces a significant gap with President Barack Obama among Latino votes. A recent USA Today/Gallup survey released July 2 indicates Romney has the backing of 26% of Hispanic voters, compared to the president at 67%.

The same poll also shows 51% of Hispanics identify as independents, while 32% call themselves Democrats and 11% say they're Republicans.

However, with the Latino population booming in the United States-especially in several important swing states such as Florida, Nevada and Colorado-Republicans acknowledge the group represents a crucial voting bloc.

Mitt Romney spent much of the presidential primary campaign trying to convince conservatives of his hard-line stance on immigration issues, labeling rivals Newt Gingrich and Texas Gov. Rick Perry as soft on illegal immigrants for suggesting some leniency for specific categories, such as students or long-time community members. He rejected the DREAM Act that would provide a pathway to citizenship for some young illegal immigrants.

On other issues, Romney has largely avoiding offering specific proposals, saying he favors state-based solutions to many immigration issues.

"Throughout his political career, Mitt Romney has appealed to the worst elements of the far-right on immigration," Burton wrote. "He called the DREAM Act a 'handout,' made 'self-deportation' the center-piece of his immigration policy, and repeated the sentiment that immigrants come to America 'looking for a free deal.' One disingenuous and deceptive political ad will not change the fact that Mitt Romney has consistently tried to benefit politically from attacking the character and motives of hardworking people who come to the United States hoping to live the American Dream."

CNN's Ashley Killough and Tom Cohen contributed to this report.