Super PAC donors may keep opening wallets, but public may not see it

Washington (CNN) - When the super PAC backing Mitt Romney, Restore Our Future, files its June donation report on Friday with the Federal Election Commission, it is expected to show a six-figure contribution from Wyoming businessman Foster Friess, his first to the group.

But an unwelcome scrutiny came to Friess, Nevada billionaire Sheldon Adelson and some of the other wealthy donors to these super PACs, and some are planning for much of their future generosity to be behind a cloak of anonymity.
END_OF_DOCUMENT_TOKEN_TO_BE_REPLACED

Washington (CNN) - It was a rare show of bipartisanship - President Barack Obama, flanked by Democrats and Republicans in April, signing into law a bill that would ban insider trading on Capitol Hill. The measure, known as the STOCK Act, had passed the House and Senate in warp speed. 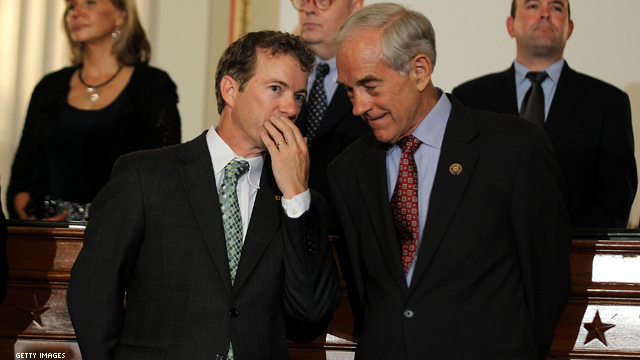 Rand Paul to father's supporters: Don't give up on the GOP

Washington (CNN) - As Republicans prepare to gather for their convention and formally nominate Mitt Romney as their presidential candidate, Sen. Rand Paul, son of Rep. Ron Paul, has some optimistic advice for his father's ardent supporters.

Asked about the libertarian political movement that has grown up around his father in the 2008 and 2012 presidential election cycles, the Kentucky senator told CNN Thursday that his father has had "an enormous effect." The younger Paul noted that there are now congressional candidates running around the country that were inspired by his father "and some of them are winning [in some GOP primaries]."
END_OF_DOCUMENT_TOKEN_TO_BE_REPLACED

Jacksonville, Florida (CNN) - Florida is an up-for-grabs state and both President Barack Obama and presumptive GOP nominee Mitt Romney are locked in a neck-and-neck race trying to convince voters their policies will help fix the nation's economic problems.

Thursday, the president made his fourth campaign stop in the last month to the state that represents a whopping 29 electoral votes.

Clinton: Romney playing by a different set of rules?

“Whatever it is, it couldn't be as bad as not doing it,” Clinton said on CNN’s “Erin Burnett OutFront.”
END_OF_DOCUMENT_TOKEN_TO_BE_REPLACED

(CNN) - President Barack Obama supports a proposed tribute at the London Olympics to honor the 11 Israeli athletes and coaches killed at the 1972 games in Munich.

“Yes, we absolutely support the campaign for a minute of silence at the Olympics to honor the Israeli athletes killed in Munich,” said National Security Council spokesman Tommy Vietor.

(CNN) - Vice President Joe Biden on Thursday chided Senate Republicans for blocking a vote on a bill that would give tax breaks to companies that bring back jobs to the U.S. from overseas.

"They prevented us from even being able to get a vote on that. So it's dead. It's dead," Biden said in a campaign speech in Ohio.
END_OF_DOCUMENT_TOKEN_TO_BE_REPLACED 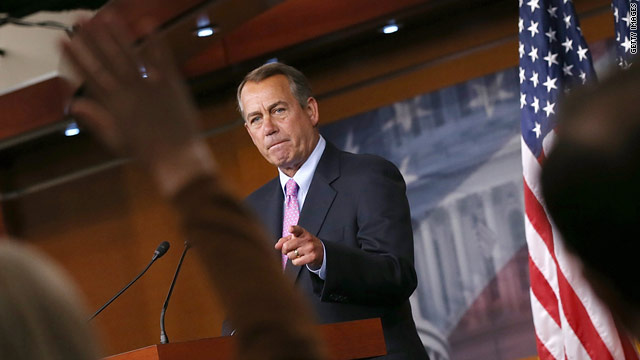 BREAKING … BOEHNER ON ATTACK … In an exclusive interview with Wolf Blitzer, House Speaker John Bohener slams Pres. Obama, “The president checked out last Labor Day. And he's been on the campaign trail nonstop ever since. It's all about him. When the American people elect us because it's about them.”

SNEAK PEEK: Sen. John McCain, R-Arizona, tells CNN’s Piers Morgan that he “saw nothing, our team saw nothing in his [Romney’s] tax returns which would have been damaging.” Tune In to “Piers Morgan Tonight” at 9 p.m. ET to hear McCain further explain his position on the Romney tax controversy and other issues.
END_OF_DOCUMENT_TOKEN_TO_BE_REPLACED 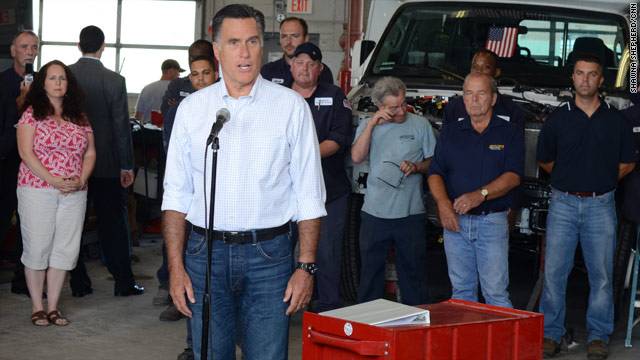 "It wasn't a gaffe. It was instead his ideology," Romney said, referring to a recent speech by the president in which he stated, "If you've got a business – you didn't build that. Somebody else made that happen."
END_OF_DOCUMENT_TOKEN_TO_BE_REPLACED

(CNN) – The presumptive GOP nominee's wife, Ann Romney, will stump for her husband in the battleground state of Michigan on Friday.

Romney will attend a Victory Center opening in Royal Oak while her husband campaigns in New Hampshire prior to his trip overseas to Israel and London for the Olympics Games next week.

Polling indicates a tight race in the Great Lakes State between President Obama and Mitt Romney.

The former Massachusetts governor's wife has been increasingly visible on the trail campaigning with her husband as August's Republican National Convention draws near.