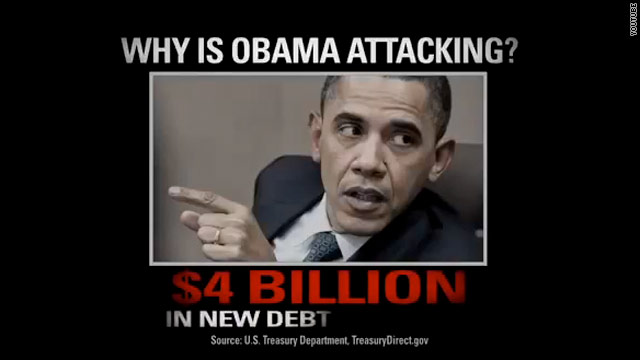 Washington (CNN) – The major Republican super PAC American Crossroads will hit the airwaves Friday with a new ad that aims to defend Mitt Romney and his record against the onslaught of attacks by the Obama re-election team. This comes as Romney's campaign has bought its largest amount of ad time this general election season.

Crossroads said it is buying $9.3 million of broadcast television and internet advertising for their commercial. Romney's campaign bought approximately $6.3 million for ad time, according to a Democratic source tracking ad buys.

In the ad from Crossroads entitled "Smoke," the super PAC tried to deflect some of the criticisms previous Obama ads have leveled about whether Romney was part of outsourcing jobs while head of the private equity firm Bain Capital.

"What happened to Barack Obama? The press and even Democrats say his attacks on Mitt Romney are misleading, unfair and untrue, blowing smoke, too far, no evidence," states the spot.

It then attacks the president's economic record. "So why is Obama attacking? He has added $4 billion in new debt every single day. Unemployment stuck above 8% every single day. Family incomes falling. Barack Obama can't run on that record."

The Obama campaign stood behind its ads saying the contentions are based on press reports.

The group said it is buying $9.3 million worth of time on broadcast television and the internet for the commercial, which will air in the battleground states of Colorado, Florida, Iowa, Michigan, North Carolina, New Hampshire, Nevada, Ohio and Virginia.

Obama's campaign bought almost $25 million worth of broadcast and cable time for the month of July in nine battleground states, and spots attacking Romney both on his business record, his financial holdings and his refusal to release more tax returns have made up the majority of that buy.

While Romney has been bombarded by the attack ads, up until now the presumptive Republican nominee's campaign nor any of the super PACs backing his candidacy have bought television time to defend him against the Obama team's media barrage.

Romney's campaign has tried to go on the offensive releasing four different ads in the last week all attacking Obama for the campaign it is waging.

Romney's campaign bought approximately $6.3 million for commercial time that began Tuesday and will run for a week, according to the Democratic source.