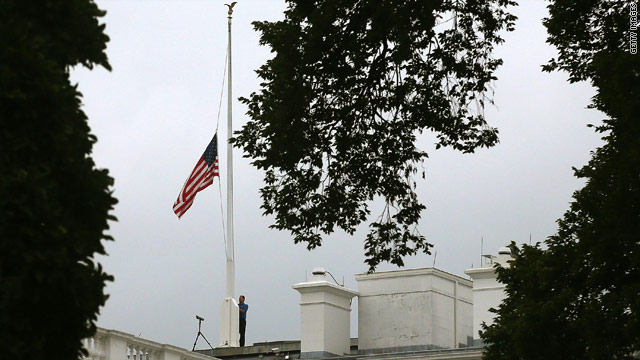 All the weapons, the source said, were purchased legally in the last six months.


the LEDE
Did you miss it?

Leading HuffPo: Movie Theatre Massacre
A graduate student in a gas mask barged into a crowded Denver-area theater during a midnight showing of the new Batman movie Friday, hurled a gas canister and then opened fire, killing 12 people and injuring at least 50 others in one of the deadliest mass shootings in recent U.S. history. – Thomas Peipert

Leading Politico: Campaigns pause after shootings
President Barack Obama on Friday called the Colorado movie theater shooting “senseless” and said his administration “stands ready to do whatever is necessary to bring whoever is responsible for this heinous crime to justice.” – Reid J. Epstein and Darren Samuelsohn

“There will be other days for politics. This will be a day for prayer and reflection.” – President Barack Obama, speaking in Fort Myers, Florida after cancelling his campaign events.


TRAIL MOMENTS
The political bites of the day

- Romney cancels campaign events -
PRESUMPTIVE REPUBLICAN PRESIDENTIAL NOMINEE MITT ROMNEY IN BOW, NEW HAMPSHIRE: “Our hearts break with the sadness of this unspeakable tragedy. Ann and I join the president and first lady and all Americans in offering our deepest condolences for those whose lives were shattered in a few moments - a few moments of evil - in Colorado.”

- Bloomberg calls out Obama, Romney -
NEW YORK CITY MAYOR MICHAEL BLOOMBERG IN AN INTERVIEW WITH WOR RADIO: “Soothing words are nice, but maybe it's time that the two people who want to be President of the United States stand up and tell us what they are going to do about it, because this is obviously a problem across the country. And everybody always says, ‘Isn’t it tragic?’ And you know, we look for was the guy, as you said, maybe trying to recreate Batman. I mean, there are so many murders with guns every day, it’s just got to stop. And instead of the two people – President Obama and Governor Romney – talking in broad things about they want to make the world a better place, okay, tell us how. And this is a real problem.”

- Governor calls shootings “depravity”  -
COLORADO GOV. JOHN HICKENLOOPER AT A PRESS CONFERENCE: “ President Obama called Mayor Hogan this morning, then called me. And I think his words are the same. There is not one of us that doesn’t read or hear of this story, certainly anyone who has children, and think about it being your child in that movie theatre. Or your cousin’s child or your neighbor’s child. And that reality makes the pain and the grief too intense for words, but we can't let it keep us from our lives.”

- This is “tough,” mayor says -
MAYOR STEVE HOGAN: “We’ve taken a blow today but we will get back on our feet and we will move ahead…. We’ll survive this. There’s no way around it. It’s tough. You can’t have that many people die and that many more people be injured in an absolutely senseless situation and not see it as anything but tough.”

- Gun Activists See Cowardice -
BRADY CAMPAIGN PRESIDENT DOUG GROSS: “This tragedy is another grim reminder that guns are the enablers of mass killers and that our nation pays an unacceptable price for our failure to keep guns out of the hands of dangerous people.  We are outraged. …
As someone who has suffered the lasting impact of gun violence, and President of Brady, I can tell you that we don’t want sympathy.  We want action. …We are insistent that our elected leaders take action to prevent future tragedies.  Political cowardice is not an excuse for evasion and inaction on this life-and-death issue.”


TOP TWEETS
What stopped us in 140 characters or less

I am stunned and furious at the news of the shooting at the Aurora Century 16 Movie theatre this morning. Our... fb.me/10OEYmHm5

Gabby and I were horrified to hear of the tragedy in Colorado last night. Our thoughts and prayers are with the victims and their families.

#theatershooting From DOD: Navy & Air Force wkg w/families of svc members to ensure they have "the care and attention they need."@wusa9

Former President George W. Bush NOT going to the GOP convention. HIs spokesman: "He's still enjoying his time off the political stage."

GUT CHECK DVR
Sunday on CNN’s “State of the Union with Candy Crowley,” Sen. John McCain, R-Arizona, talks about the Colorado movie theater massacre, the unraveling of the al-Assad regime in Syria, and Mitt Romney’s upcoming overseas trip. Then, the high stakes battle for control of the Senate with the Virginia Senate candidates, Republican George Allen and Democrat Tim Kaine. Plus, the latest on the Colorado theater shooting investigation.  9 a.m. ET on CNN.

FEEDBACK
As always, you can read CNN’s Political Gut Check online at CNN.com/GutCheck and you can reach us via email at gutcheck@cnn.com.