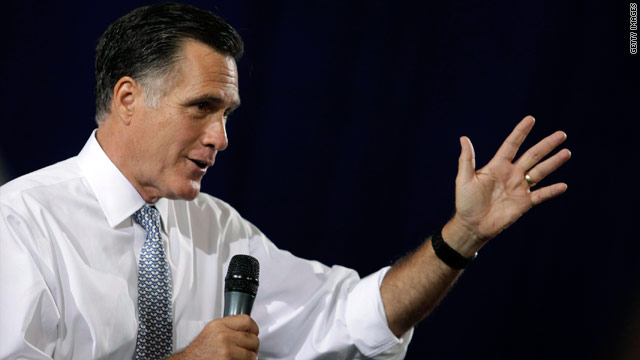 (CNN) – Mitt Romney's upcoming international swing will provide the presumptive GOP nominee an opportunity to lend authority to his presidential bid, but it will not generate any new proclamations of policy, advisers to his campaign said this week.

Romney will travel to London, Israel and Poland beginning Wednesday, meeting with top leaders in each country for sessions meant to "learn and listen" rather than to advance any particular policy contrast with President Barack Obama.

The trip, Romney campaign policy director Lanhee Chen said, would be about "locking arms with our allies."

"We don't anticipate that this is an opportunity for the governor to make any specific policy pronouncement," Chen added, saying Romney would have an opportunity to make pointed foreign policy remarks when he addresses the national convention of the Veterans of Foreign Wars on Tuesday, the day before he departs.

On his trip, however, Romney will come across some of the United States' most delicate diplomatic issues, which he has largely avoided speaking about in detail on the campaign trail in America. As a former businessman and governor, Romney will face the challenge of appearing presidential without any actual negotiating power. And his campaign will confront the logistical hurdles faced by presidents without the support structures that come with the office.

The U.K.-U.S. relationship has long been considered the United States' most important bilateral alliance, and London will be a key stop for Romney given the two countries' shared economic and military interests. Romney foreign policy director Alex Wong said the GOP candidate "understands the significance of the relationship," and said Romney's trip there reflects his understanding of the partnership.

"Today as we face a number of fiscal and economic challenges around the world, a turbulent Middle East and Iran pursuing nuclear weapons, the U.S.-U.K. relationship is as important as ever, and this leg of the trip really highlights that theme," Wong said on a conference call previewing Romney's foreign swing.

Romney has called an American plan to reduce troops earlier than the 2014 deadline "naïve" and "misguided," and says on his website he would formulate a withdrawal strategy based not on electoral politics but on the "conditions on the ground as assessed by our military commanders."

Cameron, a member of Britain's Conservative Party, said this week on a visit to Afghanistan there would be no "cliff edge" after NATO troops withdraw in 2014.

Romney, who mentions often on the campaign trail his leading role in the 2002 Salt Lake City Olympics, will be in the British capital for the opening ceremony of the 2012 Summer Games. Ann Romney, the candidate's wife, co-owns a dressage horse competing in London.

"This is a moment of pride for London, and the entire United Kingdom, so Gov. Romney is looking forward to celebrating this moment with the English people," Wong said.

From London Romney will travel to Israel, a staunch U.S. ally that Romney has made clear he would support as president. There, Romney will have several public events, according to his campaign, and will meet with officials including Israeli Prime Minister Benjamin Netanyahu, Israeli President Shimon Peres and Salam Fayyad, the prime minister of the Palestinian National Authority.

The former Massachusetts governor, who last traveled to Israel in January 2011, has had a long relationship with Netanyahu, with whom he worked at the Boston Consulting Group in the 1970s.

In an interview with CNN earlier this year, Netanyahu expressed admiration for Romney but did not go as far as making what could be considered an endorsement.

"I respect Mitt Romney as I respect Barack Obama, the president of the United States. And that's the end of the ranking," the prime minister said on CNN's "Erin Burnett OutFront." "I have enough politics here than to get into American politics."

On the trip, Romney "is looking forward to not only reconnecting with a number of leaders, but to listen and to learn. He feels strongly about the importance of locking arms with these leaders," according to Dan Senor, a foreign policy adviser to Romney's campaign.

Romney's visit to Israel will be his fourth, according to Senor. Previous trips included a visit with his family in the late 1990s and a four-day tour in January 2007, during which Romney participated in economic and security briefings.

Romney has used tough language when describing Obama's record on Israel. The candidate addressed the ongoing peace process at a CNN sponsored presidential debate in January, including the two-state solution that would result in an independent Palestinian state alongside Israel.

In Poland Romney will meet with the country's president, prime minister and foreign minister, as well as visit historical sights.

Romney's stop in Poland came after an invitation from Lech Walesa, the shipyard worker who went on to inspire the Solidarity trade union and the eventual fall of the Iron Curtain. In 1989, Poland formed the first noncommunist government in the Soviet bloc, and Walesa later was elected president. Romney will meet with Walesa in Gdansk.

In May 2011 Walesa declined to meet with President Barack Obama, telling Agence France-Presse the meeting "would only amount to a photo opportunity."

And in 2009, Walesa – who won 1983's Nobel Peace Prize - was quoted in The Wall Street Journal expressing surprise that Obama had also won the award.

"Who, Obama? So fast? Too fast - he hasn't had the time to do anything yet," the Wall Street Journal's website quoted Walesa as saying.

Romney's presence in Poland will also put the candidate's position on Russia in the spotlight. Romney has sharply criticized Obama's stance toward Russia, and said on CNN in March that Russia was the United States' "number one geopolitical foe."

Romney, however, will not use his trip to the country to criticize the president.

Ian Brzezinski, a Romney campaign foreign policy adviser, said the trip would instead reflect "support for shared values of Democracy and civil society that bind our two countries."

"This is a trip that is a great opportunity for the governor to express appreciation for this longstanding alliance and to explore the political, economic and military opportunities and challenges that are before the transatlantic relationship today," Brzezinski said.