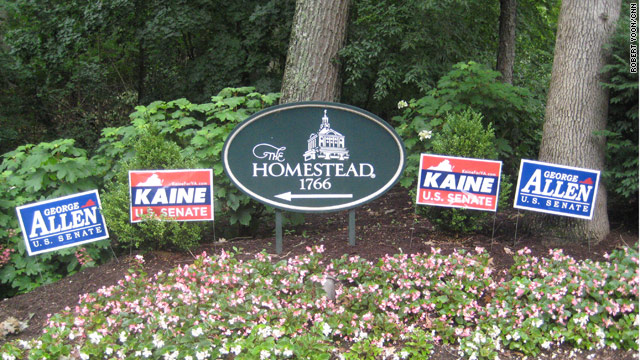 While what's hanging in the balance for the two candidates is a Senate seat, the Senate majority for each of their respective parties may be as well. Republicans now hold 47 seats in the Senate while Democrats hold 51. Two independent senators caucus with Democrats. This race, among several others nationwide, will determine which party gains control come November.

Kaine is a former chairman of the Democratic National Committee and Allen was a one-term senator who lost re-election in 2006. They are competing to fill the seat of retiring Democrat Sen. Jim Webb.

Polls suggest the candidates have remained statistically tied throughout the summer.

Allen and his supporters have drawn ties between President Obama and Kaine, using ads to link the two in hopes of deterring rural Virginia voters weary of Obama's intentions with coal.

Kaine was appointed chairman of the Democratic National Committee by Obama during the past election cycle. The candidate has not distanced himself significantly from the president, hoping to draw in voters who, in the general election, would cast a ballot for Obama. Kaine stumped with the President last week as he made the rounds through the swing state he won narrowly in 2008.

Kaine, however, has parted from Obama on the extension of the Bush-era tax cuts, logistically breaking with the incumbent over the income level that would disqualify earners from receiving the tax break. Obama has said income under $250,000 should be included in the tax breaks while Kaine would extend the breaks on income up to $500,000.

Kaine also ties his opponent to a president, likening Allen to former president George W. Bush and turning a record surplus into a massive deficit.

Virginians have been bombarded with political advertisements questioning the candidates' commitment to Virginia voters.

This contest is expected to be one of the most expensive congressional races this year. Kaine announced earlier this month that he had out-raised his opponent, bringing in a total of approximately $3 million to Allen's just over $2 million.

This ad began airing last month and highlights Kaine's focus on partisan politics. Titled "Behind," the ad criticizes Kaine's former role as Democratic National Committee chairman while he was also governor in 2009.

Over $11 million has been spent - by the campaigns and supporters of President Barack Obama and Mitt Romney, plus other outside groups - on advertizing in this battleground state's presidential race between April and July, according to CNN media consultant the Campaign Media Analysis Group.

The Senate candidates have been weighing in on hot-button issues like the Affordable Care Act and tax cuts as well as projecting onto the national political field, weighing in on the state of the presidential race between the President and presumptive nominee Mitt Romney.

Important to Virginians is the pending defense cuts set to take place as a part of the deficit reduction plan made last year. Unless Congress acts by Jan. 2, the Pentagon will face $500 billion in cuts over the next decade. With a military presence comprising a hefty portion of the economy in the Commonwealth, the candidates will tread carefully when talking about this issue.