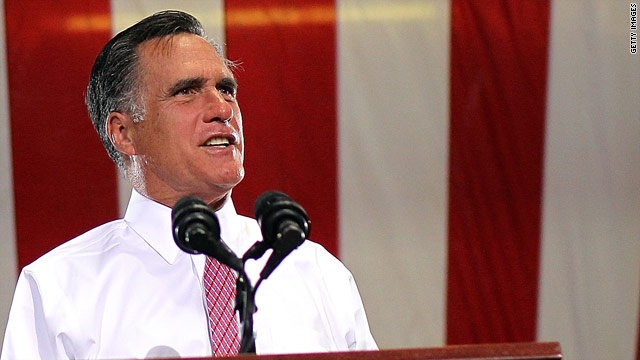 (CNN) - America's relationship with Israel, always reliable for campaign rhetoric, will come under renewed examination this week when presumptive GOP nominee Mitt Romney heads to the country as part of his foreign swing.

The visit to Israel will present an opportunity and a challenge for Romney, who has consistently expressed support for the country but has not yet outlined specific plans for key issues in the region, including negotiating peace between Israel and the Palestinians and dealing with Iran's nuclear program.

Advisers to the candidate said last week the trip would not be used to advance any new proclamations of policy or criticize President Barack Obama for his dealings with Israel, but rather to showcase a "locking of arms" with Israeli leaders.

Romney's campaign hopes that show of support will play well among Jewish voters in the United States, as well as pro-Israel evangelicals who Romney struggled to court during the GOP primaries. And while Romney's campaign said the candidate will not draw explicit contrasts between his positions and Obama's while abroad, his presence in Israel will draw attention to Obama's sometimes-shaky relationship with Israeli Prime Minister Benjamin Netanyahu, with whom Romney will meet.

The former Massachusetts governor, who last traveled to Israel in January 2011, has had a long relationship with Netanyahu since they worked together at the Boston Consulting Group in the 1970s.

On Sunday, Netanyahu said he would greet Romney in much the same style as he greeted Obama when he traveled to Israel as a candidate in July 2008.

"I'll tell him about Israel's desire for peace, and also about Israel's concern with the arming of Iran with nuclear weapons, unfortunately, still with us four years later," Netanyahu said on CBS.

On Fox News, the Israeli prime minister said Obama's past statements on Israel largely aligned with his own views, but that actions, not words, were of greater importance.

"The jury is out on all of us, because the real thing, the real question is not stated policy but actual results on the ground," Netanyahu said.

One of Romney's top surrogates on Sunday declared U.S.-Israel relations at their worst under Obama, citing decisions that he said destroyed trust between the two nations.

"Everybody knows that relations with Israel have never been worse, beginning with the demands for a freeze settlement back at the beginning of the Obama administration," Arizona Sen. John McCain said on CNN's "State of the Union."

He continued, telling CNN Chief Political Correspondent Candy Crowley: "The president sends his national security adviser and chairman of the Joint Chiefs of Staff to Israel to tell them not to attack Iran, thereby weakening Israel. The relations have never been worse. And, again, it is a lack of trust on the part of the Israelis about what the United States of America will or will not do."

The tough words from McCain are hardly new for the Romney campaign. The candidate himself said at a Republican presidential debate in January that Obama "threw Israel under the bus" for suggesting a future Palestinian state be based on borders that existed before the 1967 Six-Day War.

"I think he has time and time again shown distance from Israel, and that has created, in my view, a greater sense of aggression on the part of the Palestinians. I will stand with our friend, Israel," Romney said at the CNN sponsored debate.

On Iran, Romney has used tough language, but has yet to say definitely whether he would use the U.S. military to try and stop the country's nuclear program. Western powers fear that Iran may be trying to build nuclear weapons despite its insistence that its nuclear program is for peaceful purposes.

The tough rhetoric from Romney drew a response from Obama's re-election team, which issued a statement listing important steps taken by the Obama administration to bolster relations with Israel while slamming the Republican candidate for attempting to "score cheap political points by distorting President Obama's record of support for Israel."

"Our relationship with Israel is too important for Gov. Romney to play politics with it," Obama campaign spokesman Ben LaBolt wrote.