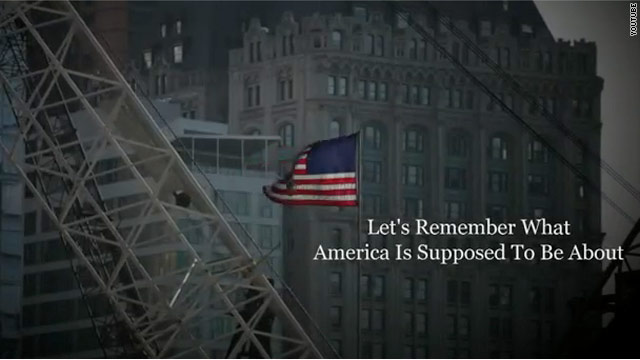 "I believe in an America where the free enterprise system flourishes for all other systems to see and admire," Kennedy is shown saying in the video. "Where no businessman lacks either competition or credit- and where no monopoly, no racketeer, no government bureaucracy can put him out of business that he built up with his own initiative."

The video then cuts to Obama pointing out that entrepreneurs did not build their businesses alone because "Somebody else made that happen," referring to governmental support systems like roads and educators.

"If you've been successful, you didn't get there on your own," Obama is shown saying at an event in Roanoke, Virginia, one of the stops during his two-day campaign tour earlier in July.

Republican presidential candidate Mitt Romney attacked the president on the statement by releasing a television ad featuring the story of a small business owner. Obama's campaign says that its rivals are taking the president's words out of context.

In his full remarks, Obama said: "If you are successful, somebody along the line gave you some help. There was a great teacher somewhere in your life. Somebody helped to create this unbelievable American system that we have that allowed you to thrive. Somebody invested in roads and bridges. If you've got a business, you didn't build that. Somebody else made that mappen. The internet didn't get invented on its own. Goverment research created the Internet so that all the companies could make money off the Internet."

Brown's two and a half minute video focuses on job creation and free enterprise through small businesses and entrepreneurs, a heated debate for the November presidential election.

The Republican candidate also makes an attack against his opponent, Warren, who is featured in the video making remarks similar to the president's.

"There is nobody in this country who got rich on his own. Nobody. You built a factory out there - good for you," Warren said. "But I want to be clear. You moved your goods to market on the roads the rest of us paid for."

Brown ends the video with a clip of him speaking at a local Chamber of Commerce, stating he "will never demonize you as business leaders and business owners for the work you do or for the opportunities you create because I think we should not be blaming you-we should be thanking you."