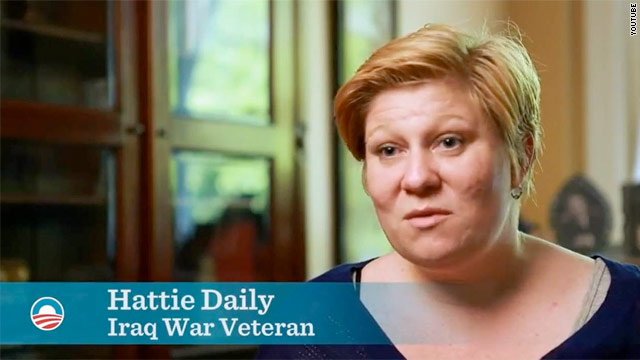 (CNN) – President Barack Obama's presidential campaign touted the candidate's achievement of ending U.S. involvement in Iraq in a web video Monday, hours ahead of Obama's address at the annual convention of the Veterans of Foreign Wars in Reno, Nevada.

The video also came the same day attacks across Iraq killed at least 44 people and wounded dozens more. While overall attacks have dropped off in Iraq since the height of violence in 2006, insurgents have routinely targeted Iraqi security forces and civilians since the United States withdrew its troops in December.

The video from Obama's campaign centers on a parade held in St. Louis in January, the first major "welcome home" ceremony to be held by a major U.S. city.

The event was held after Obama declared an end to the Iraq war in December. The video uses a clip of the president speaking at Fort Bragg, North Carolina, hailing the service of American troops as an example of what makes America great.

"As your commander in chief, and on behalf of a grateful nation, I'm proud to finally say these two words, and I know your families agree - welcome home. Welcome home," Obama told a cheering crowd.

Obama used the speech in December to mark the fulfillment of a campaign pledge he made in 2008 to end the war, which began in 2003.

Conservative critics have opposed Obama's decision to end the U.S. military presence in Iraq, arguing that some American forces should remain to help the Iraqis maintain order.

In the campaign video, one Iraq veteran argues Obama "ended the war in Iraq responsibly, he did it respectfully both to the service members serving there and the people that have served there."

Another supporter says Obama has fulfilled his obligation to returning troops.

"As these wars come to an end, we have an absolute responsibility to take care of our veterans," Carl Walker, a Vietnam War veteran, says in the video. "The president has been tireless in his effort to do that. I'm extremely proud of him."

Obama last spoke to the VFW in 2009. His Republican challenger Mitt Romney will address the group on Tuesday.