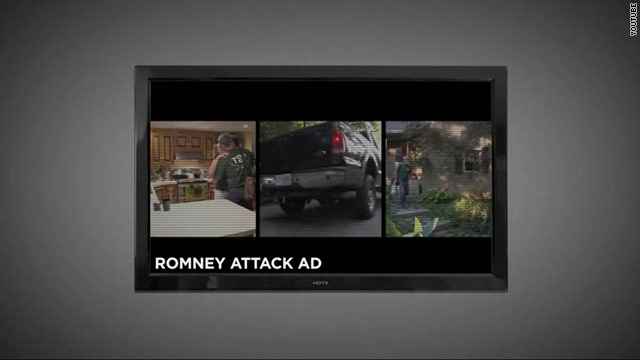 (CNN) – As Mitt Romney and fellow Republicans ramp up their attacks on President Barack Obama for his remarks on small business, the president's operation is pushing back with a duo of web videos arguing the comments are out on context.

Various bits and pieces of that line have been used in attacks from Romney, the presumptive GOP nominee, as well as the Republican National Committee and others seeking to defeat Obama in November. Last week Romney's campaign released a television spot using a portion of Obama's quote, paired with sharp criticism of the president along from the owner of a metal fabricating company.

In two web videos released Monday and Tuesday, Obama's team says the attacks are taking the president out of context. In one 30-second spot, the campaign portrays the effort as part of a pattern.

"Seen this ad?" the video begins, playing a clip of Romney's spot from last week.

"Wait a minute," continues the narrator in the Obama's web video. "Romney deliberately altered the meaning of the president's words. Actually he was talking about building infrastructure and education, not that individuals don't build their own businesses."

The narrator asserts that "Romney's been caught doing this before," citing the first ad Romney's campaign purchased in his bid for the presidency in November. In that spot, Obama is shown saying in 2008, "If we keep talking about the economy, we're going to lose."

Obama's entire line was: "Senator McCain's campaign actually said, and I quote, 'If we keep talking about the economy, we're going to lose.'"

A second video from Obama's campaign features deputy campaign manager Stephanie Cutter, urging supporters to explain to their family and friends the full thrust of Obama's words.
"We all have a relative who spends all their time forwarding those crazy email chains. So make sure they get the facts too," Cutter says.

"Steph Cutter and Team Obama continue throwing their fake tantrum over the context of the president's economic comments thinking we'll overlook reality," RNC spokeswoman Kirsten Kukowski wrote. "The fact is from his 'you didn't build that' and the private sector is 'doing fine' comments to the fact that he hasn't met with his jobs council in 6 months and hasn't had a daily economic briefing in over a year, we know these aren't gaffes or out of context – they are Obama's beliefs."

Romney continued by slammed Obama, saying "This is an ideology which says hey, we're all the same here, we ought to take from all and give to one another and that achievement, individual initiative and risk-taking and success are not to be rewarded as they have in the past. It's a very strange and in some respects foreign to the American experience type of philosophy."