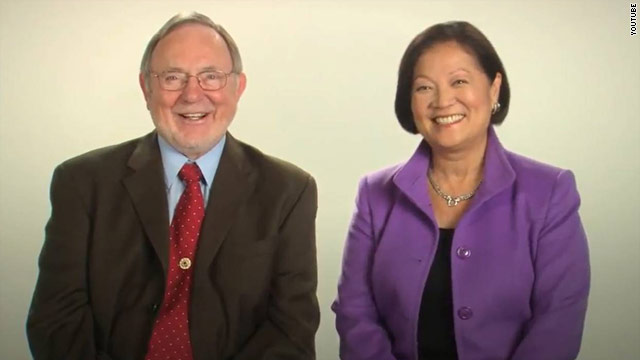 (CNN) – Longtime Republican Rep. Don Young of Alaska on Tuesday made a rarely-seen move by crossing party lines to endorse a Hawaii Democrat in her U.S. Senate bid.

Young, the sole representative from Alaska, taped a video with three-term Rep. Mazie Hirono to offer his support as Hirono competes in the Democratic primary.

"While Mazie and I don't see eye-to-eye on everything, we've done something too many people in Washington refuse to cross the aisle and do: We've worked together," Young says in the video, sitting alongside Hirono.

The two noted a piece of legislation on which they both worked to protect native education plans in their home states.

"Once Don and I joined together as a Republican and Democrat, I had to battle my own party leadership to get our amendment passed," Horino says in the video.

Young adds: "It's true. I watched Mazie do it. And let me tell you, that Nancy Pelosi is one stubborn..."

Jumping in, Horino says: "Don, what have I told you?"

"I...I...will not say anything else," Young says, jokingly. "But here's what's important to Hawaii. If you're looking for a United States Senator who doesn't just talk about bipartisanship but actually knows how to work with both Republicans and Democrats to get things done, Mazie Hirono will be that senator."

Horino is running against former Rep. Ed Case in the Democratic primary, scheduled to take place August 11. The winner of that contest will face off against the Republican candidate in the general election for the open Senate seat to replace retiring Sen. Daniel Akaka, a Democrat.

The race this fall is expected to be competitive, as Republicans see it as a chance to pick up a seat in the Senate. Political handicapper Charlie Cook rates Hawaii's Senate race as a "toss-up," while Stuart Rothenberg rates it as "leaning Democrat."

Whether or not Young's endorsement will help Horino remains to be seen. Young, now in his 19th term, faced a 2005 Justice Department criminal investigation of corruption charges in Alaska, as well as a House Ethics Committee probe over campaign contributions.

The federal investigation, however, ended in 2010 with investigators finding insufficient evidence to charge Young with seeking earmark money on behalf of a political donor. Meanwhile, the House Ethics Committee, in 2011, ruled Young was not in violation of House rules in connection with a separate campaign contribution related matter.

Elected in 2006, Hirono has significantly outraised her Democratic opponent, Ed Case. According to Federal Election Commission filings, the congresswoman has brought in $3.2 million this cycle compared to Case's $740,000.