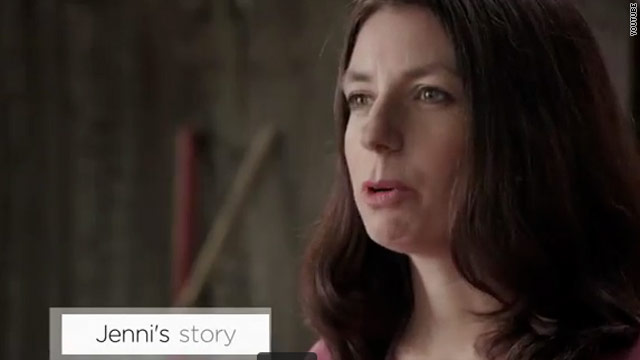 Washington (CNN) - For the second time this month, President Barack Obama's re-election campaign is hitting Mitt Romney over his opposition to abortion in a television ad, as the two candidates battle for the crucial women's vote.

A new spot from Team Obama starts with a graphic saying "Women speak on Mitt Romney" and then features one woman, named Jenni, saying to the camera: "I've never felt this way before, but it's just a scary time to be a woman. Mitt Romney is so out of touch."

Then a female narrator talks about Romney opposing a policy that would have required coverage for contraception and supporting overturning Roe v. Wade. The ad also says Romney would back a federal bill that outlaws abortion. The spot concludes with the same woman, Jenni, saying: "There's so much we need to do. We need to attack our problems – not a woman's choice."

The commercial, part of the new Obama-Democratic National Committee ad coordination buy, is airing in Florida, Iowa, North Carolina, New Hampshire, Virginia, Nevada and Ohio. It will start running in Colorado on Monday.

Regarding the claim of the presumptive Republican nominee supporting a bill that would ban all abortions, the Obama campaign cited a CNN debate in November, in which Romney said if Roe v. Wade were overturned and Congress passed legislation returning the issue to the states, he would be "delighted" to sign that bill.

Obama's campaign also pointed to Romney's stated support for the Republican Party platform, which includes a human life amendment. The fact-checking website Politifact, however, rated the claim "Pants on Fire," pointing out there are many versions of that amendment, with some recent ones allowing abortion after rape or incest. Also, the site noted that in 2011, the former Massachusetts governor said he supported the exceptions.

In reaction to the ad, the Romney campaign did not specifically mention his abortion opposition and possible exceptions. Instead, his team shot back by focusing, as it has for well over a week, on remarks the president said earlier this month about how successful businesses got help along the line.

"If you are successful, somebody along the line gave you some help. There was a great teacher somewhere in your life. Somebody helped to create this unbelievable American system that we have that allowed you to thrive. Somebody invested in roads and bridges. If you've got a business, you didn't build that. Somebody else made that happen," the president said in Roanoke, Virginia.

"It's no coincidence that after weeks of terrible economic news and the President's comments that businessmen and women aren't responsible for their own hard work, the Obama campaign drops false ads against Governor Romney in a desperate attempt to change the subject," Romney campaign spokeswoman Amanda Henneberg said in a statement.