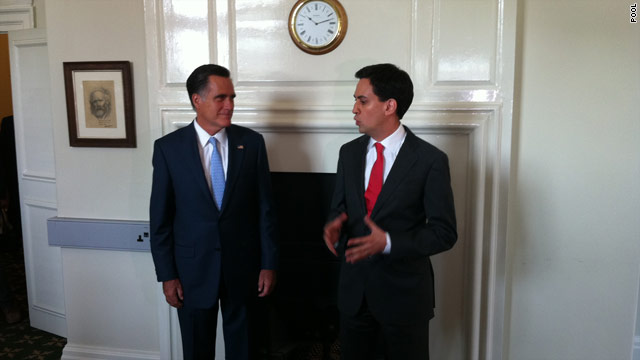 Mitt Romney meets with Ed Miliband, the leader of the Labour opposition party, in London on Thursday.
July 26th, 2012
11:05 AM ET

(CNN) – Mitt Romney described his Thursday meetings with British political leaders as "enlightening and instructive" on the first day of his nearly week-long foreign tour.

Britain has long been considered the top ally of the United States, and Romney made clear he understood the importance of the relationship following a meeting with British Prime Minister David Cameron.

"I have enjoyed the personal opportunity to come to know a number of the members of the leadership here in Great Britain," Romney said outside 10 Downing Street. "I can tell you that I also feel as Americans do across our nation a special relationship with the nation of Great Britain and with the people here."

Romney said he and Cameron discussed volatile situations in Syria and Iran, though he declined to describe the discussion in detail.

"We did speak at some length about Syria, about Iran, Egypt, Tunisia, Libya as well as Pakistan, Afghanistan, among other places in the world," Romney said. "I don't want to refer to any comments made by leaders representing other nations. Nor do I want to describe foreign policy positions I might have while I'm on foreign soil. I think discussions of foreign policy should be made by the president and the current administration not by those that are seeking office."

Romney also sat down with former British Prime Minister Tony Blair and Ed Miliband, the leader of the opposition Labour Party. He toured an Olympics exhibit with British Foreign Secretary William Hague and visited the office of George Osborne, the chancellor of the Exchequer.

Romney praised Britain for its efforts in Afghanistan ahead of his meeting with Miliband, saying Brits have "sacrificed enormously" in helping to bring peace to the country.

On Tuesday, Romney said he supports the timetable agreed to by NATO of withdrawing combat troops by the end of 2014, but criticized President Barack Obama for announcing plans to bring home some troops before the November election.

Asked about current British economic policies that favor austerity over growth, Romney demurred, saying he did not want to criticize any government's policies while abroad.

Romney did not answer questions ahead of his discussion with Blair, though the two were filmed chatting about the weather and the upcoming Olympic games, scheduled to begin Friday in the British capital. Romney will attend the opening ceremony Friday evening.

Romney, meeting with Blair at his office in Grosvenor Square, said he was "looking forward to the chance to see at least one event. I'm hoping to see at least one swimming event. And my wife has a horse competing in the equestrian events, in dressage. Her horse was chosen number three of all U.S. horses, so she's very pleased to be a part of that."

Rafalca, the horse co-owned by Ann Romney and trainer Jan Ebeling, earned a spot on the U.S. Equestrian Team in June.

Romney's meetings Thursday are the beginning of a nearly week-long trip that will also take the candidate to Israel and Poland, a tour meant to bolster his foreign policy credentials months ahead of November's general election.

On Wednesday, Romney and his campaign distanced themselves from an anonymous quote in The Daily Telegraph, sourced to a Romney campaign "adviser," that stated the candidate felt the White House did not understand the shared "Anglo-Saxon heritage" between the United States and Britain.

The quote generated heated reaction from Romney's rivals, including from Vice President Joe Biden, who called it a "disturbing start" to Romney's trip.

"I'm not sure who this person is, but I can tell you that we have a very special relationship between the United States and Great Britain," Romney said on NBC, building on pushback his campaign had already initiated earlier in the day.

On his visit to London, Romney also hopes to highlight his leading role in the 2002 Salt Lake City Olympics. His campaign frequently cites his experience there by saying he turned around a failing operation into one of the most successful games in history.

In his interview Wednesday, Romney expressed concern about how well-prepared London was for hosting the games, saying reports of security shortfalls were "disconcerting."

"The stories about the private security firm not having enough people, the supposed strike of the immigration and customs officials - that obviously is not something which is encouraging," he said on NBC.

Romney also questioned whether or not the British people were supportive of the Games.

"Do they come together and celebrate the Olympic moment? And that's something which we only find out once the Games actually begin," he said.

After his meeting with Cameron, Romney took pains to praise specific efforts made by the British Olympic effort, inclduing the construction of volleyball courts outside the prime minister's residence.