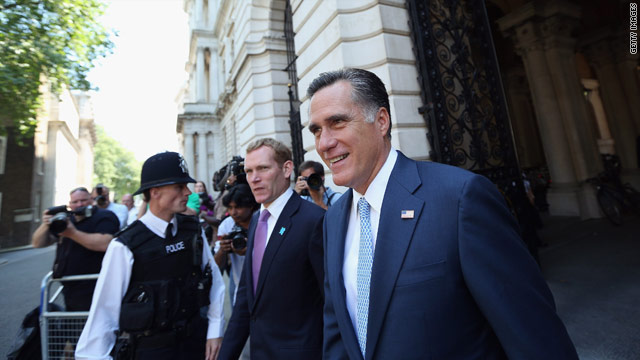 "You know it's hard to know just how well it will turn out," Romney said. "There are a few things that were disconcerting. The stories about the private security firm not having enough people, the supposed strike of the immigration and customs officials - that obviously is not something which is encouraging."

On Wednesday, British immigration officiers who had been planning to strike Thursday - one day before the official start of the Olympic Games - called off plans to walk off the job.

Earlier this month, it was revealed that the firm charged with providing security for the Games could not provide the number of guards they originally promised. The company's chief executive, under pressure before a panel of British lawmakers, agreed the fiasco was a "a humiliating shambles" last week.

In his interview, Romney said there were three elements that made an Olympic Games successful: athletes, volunteers, and the people living in the country where the competition takes place.

READ MORE: London prepares for an Olympics to remember

Romney, who led the 2002 Winter Games in Salt Lake City, is in London ahead of a three-country overseas tour that will also take him to Israel and Poland. He will attend the opening ceremony of the Olympics Friday, and will hope to highlight his achievements from the 2002 Games.

British Prime Minister David Cameron was asked about Romney's comments at a press conference Thursday, ahead of his scheduled meeting with the GOP candidate.

"I think we will show the whole world not just that we come together as a United Kingdom but also we're extremely good at welcoming people from across the world," Cameron said, adding that he anticipated the country would come together to welcome world athletes. Cameron said he planned to make similar points to Romney during their meeting.

Speaking before a meeting Thursday with Ed Miliband, the leader of the Labour opposition party, Romney said that mistakes were inevitable when it comes to the Olympics.

"My experience with regards to the Olympics is it is impossible for absolutely no mistakes to occur," Romney said. "Of course there will be errors from time to time, but those are all overshadowed by the extraordinary demonstrations of courage, character and determination by the athletes. The Games are, after all, about the athletes, the volunteers and the people of the community that come together to celebrate those athletes. They are not about the Organizing Committee. And as soon as the sporting events begin, we all forget the organizers and focus on the athletes."