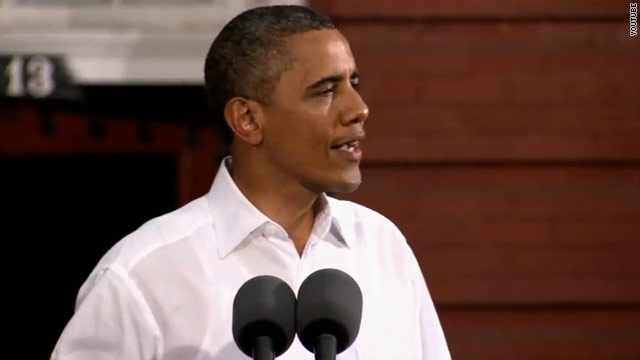 The 30-second spot, “I believe,” takes a positive tone and features the president talking on the campaign trail about his vision for the middle class.

“I believe that the way you grow the economy is from the middle out,” he says in the ad, repeating a line he often uses in his stump speeches. “I believe in fighting for the middle class, because if they’re prospering, all of us will prosper.”

In June, Obama’s team bought $6.5 million of ad time on various NBC networks during the Olympics, with $1 million dedicated to the opening ceremony, according to a Republican ad tracking source.

Along with footage of the president speaking, the ad also includes video of Americans at work on farms, hospitals and office environments.

“We’re a nation of workers and doers and dreamers. We work hard for what we get. And all we ask for is that our hard work pays off,” Obama says.

The new ad comes as his team plays defense over comments the president made recently about business, which have since been used in attack ads by Republicans and Mitt Romney’s campaign.

Speaking in Roanoke, Virginia earlier this month, Obama argued that successful business owners have had help along the way.

"If you are successful, somebody along the line gave you some help. There was a great teacher somewhere in your life. Somebody helped to create this unbelievable American system that we have that allowed you to thrive. Somebody invested in roads and bridges. If you've got a business, you didn't build that. Somebody else made that happen," the president said.

Critics quickly pounced on his words, focusing on the part in which he said, “You didn’t build that,” and arguing the president’s remarks reflect a philosophy of big government.

Obama’s campaign released an ad earlier this week, responding to the attacks.

"Those ads taking my words about small business out of context; they're flat out wrong. Of course Americans build their own business. Everyday hard-working people sacrifice to meet a payroll, create jobs, and make our economy run," Obama says in the ad.

- CNN’s Kevin Bohn and Paul Steinhauser contributed to this report.