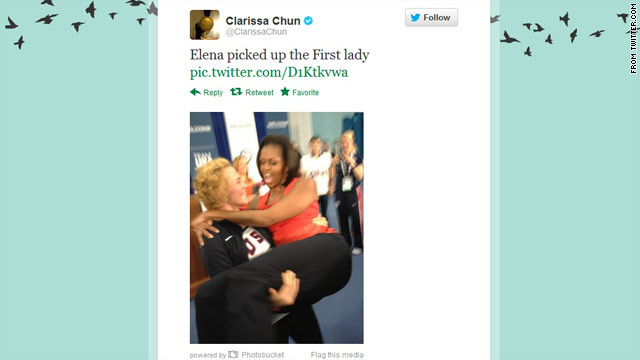 (CNN) - First lady Michelle Obama was in London this weekend to give the U.S. Olympic team a boost, and one of the athletes returned the favor.

When wrestler Elena Pirozhkova met Obama on Friday, she asked, "Can I pick you up?"

The first lady responded "um, yes," according to an account of the moment posted to the USA Wrestling website.

A fellow U.S. wrestler - Clarissa Chun - captured the moment and tweeted a picture.

The 5-foot-5 Pirozhkova competes in the 63 kilogram (approximately 138 lbs) category, and told USA Today after the hug that she wanted to greet the first lady differently.

"Even before she made the rounds I thought I can't just hug her like everybody else," she said. "I think she was nervous. I went slow. I just picked her up. I wanted to ask her permission. There was security all around. And she gave it. I will only meet her once. I wanted to do something different."

Obama led the presidential delegation to the opening ceremony of the London Games, and she stayed in the city for meetings, events related to her Let's Move! health initiative, and to attend Olympic contests.