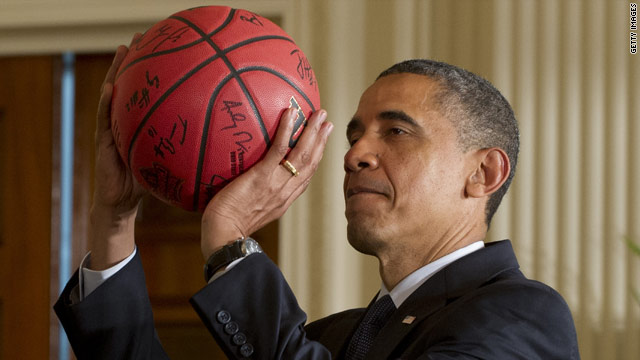 President Barack Obama holds a basketball given to him by the 2012 NCAA Champions University of Kentucky men's basketball team in the East Room of the White House in May
July 28th, 2012
12:58 PM ET

(CNN) - As the U.S. women's basketball team takes on Croatia and first lady Michelle Obama cheers for the nation's athletes in London, President Barack Obama may also be feeling the Olympic spirit back home.

Obama shot hoops at the FBI building in Washington on Saturday. Meanwhile, both his wife and Republican presidential contender Mitt Romney are overseas experiencing the 2012 Games.

Romney has said that he would like to see a men's swimming event prior to leaving for Israel Saturday. Michelle Obama plans to see a few events as well after leading the American delegation during the opening ceremonies on Friday.

"He's like, 'I love the Olympics. I can't wait for the Olympics to start," Carney said at Friday's press briefing of the president's affinity for the Games.

Asked what events the president will watch, Carney said, "His interests are very broad, and he's read up on a lot of our athletes and on the upcoming competitions and looks forward to catching as much of the Games that he can, his schedule being what it is."