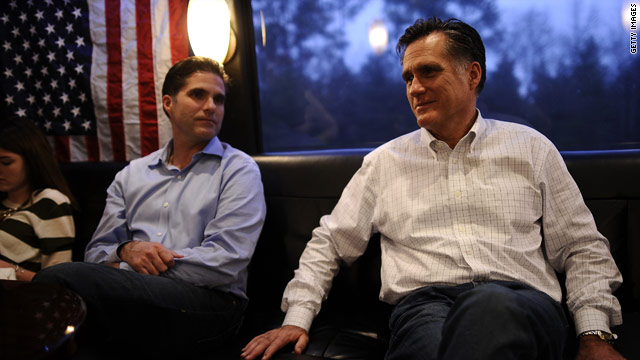 (CNN) - Mitt Romney's son on Saturday e-mailed supporters promoting a line of merchandise which hits continues to hit President Barack Obama over his comment to business owners that "you didn't build that."

Tagg Romney pitched the "Built By Us Collection," which includes posters, buttons, and T-shirts highlighting the remark, which Romney and other Republicans have criticized.

"Built By Us is a rallying cry, and also a celebration of the people who truly make America work," Tagg Romney said in the e-mail.

At a campaign event in Roanoke, Virginia, on July 13, Obama said: "If you were successful, somebody along the line gave you some help. There was a great teacher somewhere in your life. Somebody helped to create this unbelievable American system that we have that allowed you to thrive. Somebody invested in roads and bridges.

"If you've got a business - you didn't build that. Somebody else made that happen. The Internet didn't get invented on its own. Government research created the Internet so that all the companies could make money off the Internet," he continued.

Republicans seized on the comment, and the Obama campaign responded on Tuesday with an ad which said Republicans are taking his comment out of context.

"Of course Americans build their own business. Every day hardworking people sacrifice to meet a payroll, create jobs, and make our economy run. And what I said was that we need to stand behind them as America always has. By investing in education, training, roads and bridges, research and technology," Obama said in the ad.

One of the Romney campaign T-shirts reads, "Government didn't build my business, I did."

Tagg Romney said in the e-mail that "Dad understands success is not the result of government, it's the result of hardworking people who take risks, create dreams, and build lives for themselves and their families."

"I think we can all agree we need a President who embraces success, instead of demonizing it," he continued. "Dad's the man for the job."

While Romney is overseas - holding meetings with officials in London, Israel, and Poland, among other events - his campaign has continued stateside.

A series of surrogates, including several rumored possible vice presidential candidates, held events for the Romney campaign on Saturday, and several also continued to pressure Obama over his handling of the economy.

- CNN's Kevin Bohn and Gregory Wallace contributed to this report.