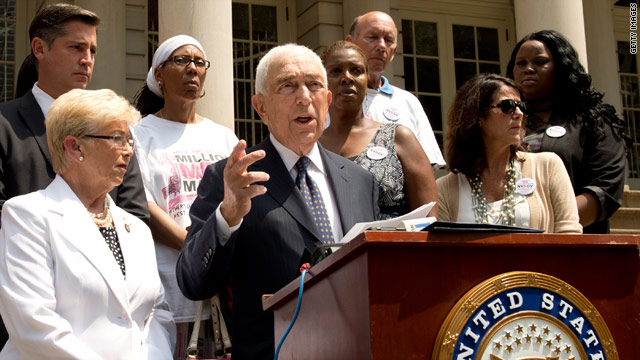 Longtime gun control advocates Sen. Frank Lautenberg, D-New Jersey, and Rep. Carolyn McCarthy, D-New York, introduced the bill that they said would prevent buyers from purchasing unlimited quantities of ammunition through the Internet or through the mail. The bill would also require ammunition dealers to report bulk ammo sales to law enforcement.

A rising star in the Democratic Party, Warren will speak in primetime just before former President Bill Clinton, who will enter President Obama’s name into the nomination.
END_OF_DOCUMENT_TOKEN_TO_BE_REPLACED

Romney talks tough but differs little from Obama on Iran

Washington (CNN) - Mitt Romney seeks to assure Israel and Iran, as well as Jewish voters in the United States, that he will be tougher against Iran's nuclear ambitions than President Barack Obama.

So far, though, the main differences on the issue between the presumptive Republican nominee and the president he hopes to defeat in the November election involve tone and nuance more than substance.

The Ohio Republican is in his ninth term and is among a dwindling group of GOP moderates on Capitol Hill.
END_OF_DOCUMENT_TOKEN_TO_BE_REPLACED

(CNN) – Former President Bill Clinton is experiencing a wave of favorability with two-thirds of Americans approving of him, a poll released Monday shows.

Clinton’s popularity comes as the politician prepares to officially enter President Barack Obama into nomination at the Democratic National Convention in September. A symbol of the Democratic Party, Clinton's favorability could help the president at the polls come Election Day.
END_OF_DOCUMENT_TOKEN_TO_BE_REPLACED 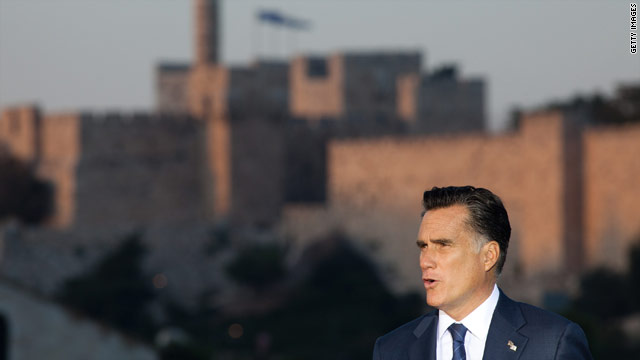 (CNN) - If Mitt Romney has indeed fumbled the football overseas, President Barack Obama's campaign may well be seen as spiking it.

JUST IN: TOP ISRAELI POLITICIANS LAUD CLOSE TIES WITH THE UNITED STATES, WHITE HOUSE… Both President Shimon Peres and Defense Minister Ehud Barak highlighted, in an interview with CNN’s Wolf Blitzer, the relationship the Obama administration has kept with Israel.

Peres: “When I look at the record of President Obama concerning the major issues, security, I think it's a highly satisfactory record, from an Israeli point of view.”

Barak: “I should tell you honestly that this administration under President Obama is doing, in regard to our security, more than anything that I can remember in the past. … In terms of the support for our security, the cooperation of our intelligence, the sharing of sorts in a very open way even when there are differences.”

Tune in at 5 p.m. ET to “The Situation Room with Wolf Blitzer.”

DEVELOPING: DNC PLATFORM TO INCLUDE SAME SEX MARRIAGE… The Democratic National Committee took a step this weekend towards recognizing same sex marriage in the party’s convention platform. Meeting in Minneapolis, Democrats approved draft language that will now be reviewed by the full platform committee. If approved by the committee and then the delegates at the Democratic National Convention in Charlotte, it would mark the first time support for same-sex marriage was part of the Democrats' platform.

END_OF_DOCUMENT_TOKEN_TO_BE_REPLACED

Washington (CNN) - When Democratic Sen. Frank Lautenberg of New Jersey and Rep. Carolyn McCarthy of New York unveiled their bill Monday to regulate the online and mail-order sale of ammunition, they did so in a state most friendly to Democrats - New York.

But across the country, voters might not be as receptive. Gun control can be seen as political quicksand for Democratic lawmakers.

(CNN) – Israel's Deputy Prime Minister and Minister of Defense Ehud Barak said the Obama White House has been the most supportive administration throughout the two countries' diplomatic relations on matters of Israeli security, in an interview to air Monday on "The Situation Room with Wolf Blitzer."

Barak -also a former prime minister of Israel - said that though historically administrations from both political parties have supported the Jewish state President Obama's support, security-wise, is unparalleled.
END_OF_DOCUMENT_TOKEN_TO_BE_REPLACED

(CNN) – Presumptive Republican presidential nominee Mitt Romney clarified his March remark that Russia is the nation's top foe, saying in an interview to air Monday on CNN's "The Situation Room with Wolf Blitzer" that Iran potentially poses the greatest national security threat to the U.S.

"The number one national security threat, of course, to our nation is a nuclear Iran," he told CNN's Wolf Blitzer, speaking in Jerusalem about the nearby nation.
END_OF_DOCUMENT_TOKEN_TO_BE_REPLACED