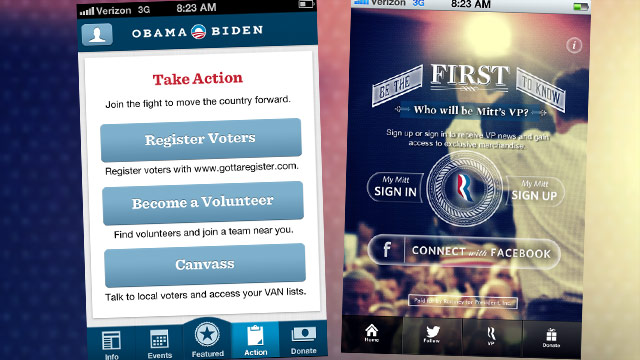 Team Romney's app, called "Mitt's VP," will send a notification to users when the candidate is ready to announce his vice presidential selection. The campaign said the app would be the "first official distribution channel" for the big reveal.

"The historic announcement is getting closer," Beth Myers, who heads the Romney campaign's search for a number two, wrote in a statement. "Soon everyone will know who Mitt Romney selects as his Vice Presidential running mate. With this new app, users can be the first to know the second member of America's Comeback Team."

Last week, Myers offered a potential hint on the search for a running mate, tweeting a list of names that have all been speculated as potential VP picks.

Obama's campaign also premiered a mobile phone app Tuesday that allows volunteers to get information about phone banks and events, as well as enter voter information on neighborhood canvass walks.

The campaign said the app would also help people register to vote and provide information on new voter ID laws.

"The campaign's strength has always come from the millions of grassroots supporters who are organizing in their communities and talking to their neighbors about President Obama every day," Obama Deputy Campaign Manager Stephanie Cutter wrote.

She said the new app would "help break down the distinction between online and offline organizing, giving every supporter the same opportunities to get involved that they would find in a field office."