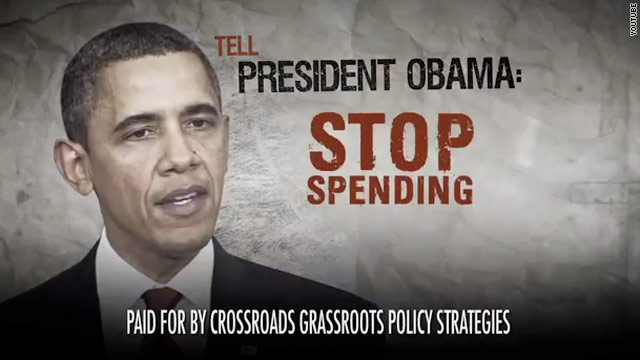 The ad opens with CBS News anchor Scott Pelley saying in a July newscast, "Good evening. This is the worst economic recovery America has ever had."

The commercial , "News," then cites figures from the Bureau of Labor Statistics stating the country has had 41 straight months of an unemployment rate above 8%, with 23 million Americans without full time work.

The 23 million figure, used frequently by Mitt Romney on the campaign trail, includes those who are out of work, as well as about 8 million who are only working part time, according to the bureau.

At the end of the commercial, the narrator urges viewers to "tell (Obama) for real job growth, stop spending and cut the debt."

Crossroads GPS will air the ad, which comes as part of a recent $25 million ad buy, in the battleground states of Colorado, Florida, Iowa, Michigan, North Carolina, New Hampshire, Nevada, Ohio and Virginia.

The group's latest ad marks one of a serious of recent spots hitting the president over the economy. Crossroads GPS has spent tens of millions of dollars to run advocacy ads critical of the president and in support of GOP lawmakers and candidates in crucial Senate contests.

Obama's campaign did not immediately respond to a request for comment on this ad.

Responding to the ad, the Democratic National Committee said the commercial "ignores the president's record" and points to the 4.4 million private sector jobs created in the last 28 months, as well as a $2 trillion deficit-reduction plan signed into law.

"Mitt Romney wants to take us back to the same failed policies that caused the recession, exploded our deficits, and punished the middle class in the first place-massive tax cuts for the wealthiest Americans and letting Wall Street write its own rules. Independent economists agree his plan would do nothing to create jobs now and could drive us back into recession," the statement read.