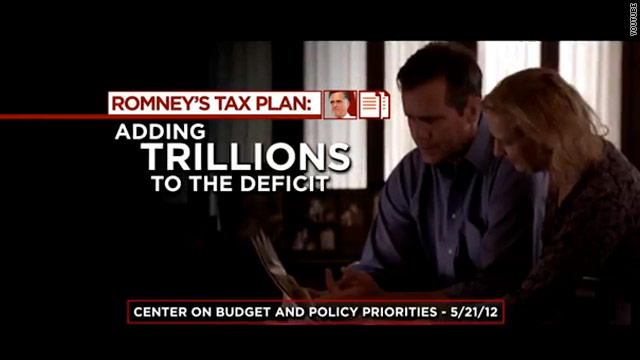 The 30-second spot, "Worried," begins with references to what could be interpreted as George W. Bush-era policies.

"You watched, and worried," the narrator says. "Two wars. Tax cuts for millionaires. Debt piled up."

Transitioning to present-day, the narrator then says, "And now we face a choice."

With a photo of Romney on screen, the narrator adds the presumptive GOP nominee's tax plan would support a $250,000 tax cut for millionaires, citing a report by the Tax Policy Center.

The ad also argues Romney would increase military spending, while the campaign backs up their claim by pointing to a CNNMoney analysis showing Romney's plan would boost military spending by $2 trillion over the next 10 years.

The commercial also argues Romney's tax cut proposals would add "trillions to the deficit,” highlighting a study by the Center on Budget and Policy Priorities that finds the Romney plan would increase the deficit by approximately $5 trillion between 2014 and 2022.

Meanwhile, the ad says the president's proposed budget would reduce the deficit by $4 trillion through measures that include spending cuts and raising taxes on millionaires.

"I'm Barack Obama and I approve this message because to cut the deficit we need everyone to pay their fair share," the president says in the ad.

Obama's team is rotating a series of spots in an ad buy worth $5.3 million, running from July 21 to August 3.

The commercial released Tuesday will air in the battleground states of Colorado, Iowa, New Hampshire, Nevada, Ohio and Florida. Absent from the list are North Carolina and Virginia, two battleground states in which the Obama campaign has heavily advertised in the last six weeks-although the campaign has bought time in both of those states through Friday.

A campaign aide told CNN “we’ve been going heavier/lighter in various markets with our buys for the past couple months and we will continue to do so.”

A spokesman for Romney's campaign called the spot "ridiculous."

"This is a ridiculous ad coming from a president who shattered his pledge to cut the deficit in half by the end of his first term. Under Barack Obama, our nation has suffered from one trillion-dollar deficit after another, contributing to America's first-ever credit rating downgrade," spokesman Ryan Williams said. "President Obama's plans to raise taxes and cut the military won't create jobs or make us safer.

"As president, Mitt Romney will revive our economy, strengthen our military, and repair the damage done to the middle class by President Obama's failed policies," he continued.