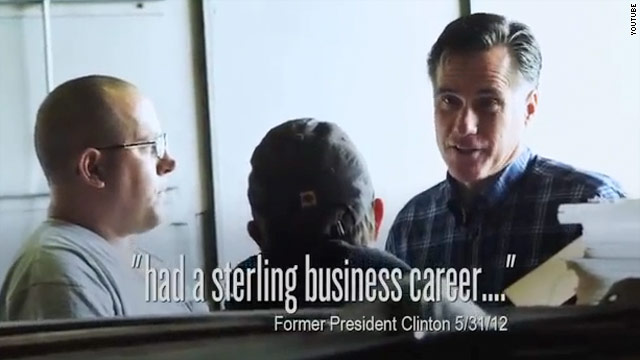 (CNN) - In a new television ad released Tuesday, Mitt Romney touts a record of success in his former roles as businessman, head of the 2002 Salt Lake City Olympic Games and governor of Massachusetts.

"My own experience was I got the chance to start my own business," Romney says in the ad, which splices together footage from a variety of interviews and speeches by the candidate.

Text on the screen features a quote from Bill Clinton, who said in an interview with CNN's Piers Morgan that Romney had a "sterling business career."

In the largely positive spot, paid for by the Romney campaign and the Republican National Committee, Romney is featured saying in a June speech that "freedom and free enterprise are what create jobs, not government."

The line hits at the heart of a comment President Barack Obama recently made about businesses, in which he said, "If you were successful, somebody along the line gave you some help."

At a campaign event in Virginia on July 13, Obama continued: "There was a great teacher somewhere in your life. Somebody helped to create this unbelievable American system that we have that allowed you to thrive. Somebody invested in roads and bridges. If you've got a business – you didn't build that. Somebody else made that happen."

Republicans have used a portion of the quote–"If you've got a business – you didn't build that. Somebody else made that happen"–as a prominent line of attack against Obama, pinning it as example of big government philosophy coming from the Oval Office. Obama has since hit back, saying the line was taken out of context.

Continuing in the ad, Romney makes the case that his multifaceted career best prepares him for the White House.

"I want to use those experiences to help Americans have a better future," he says.

The ad ends with text on the screen, again taking a jab at the president's "you didn't build that" comment.

"Believe in the American you built. Believe we can build it again," the screen reads.

While it's unclear how much was spent on this particular commercial, "Believe in our Future," the Romney campaign and the RNC together bought $7.3 million in air time in eight battleground states last week to run through Tuesday, according to a Republican ad tracking source.

The Federal Election Commission has said each party committee can spend $21.6 million in coordinated efforts this campaign cycle.

Responding to the ad, Obama's campaign on Tuesday released a statement faulting Romney point by point on his stated accomplishments.

“In both the public and private sectors, Mitt Romney’s record is one of outsourcing, job losses, and massive debt. As a corporate buyout specialist, Romney loaded companies up with debt, driving several into bankruptcy while he made millions for himself, thousands of workers lost their jobs, and his companies shipped American jobs overseas. At the Olympics, Romney lobbied for billions in federal spending, which even John McCain called ‘a national disgrace.’ And as Governor, Romney outsourced jobs and cut taxes for millionaires while raising taxes and fees on the middle class and small business – driving the state down to 47th out of 50 in job creation and leaving Massachusetts first in the nation in per capita debt," said Lis Smith, a spokeswoman for the Obama re-election campaign.