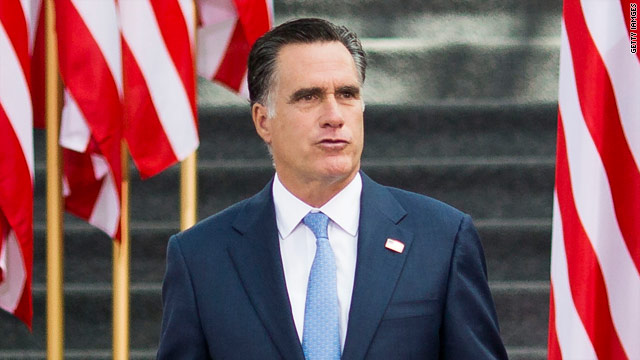 (CNN) - A few hours after Mitt Romney departed Poland to return to the United States, President Barack Obama's re-election campaign piled on to its criticism of the presumptive GOP nominee's foreign trip, calling it an "embarrassing disaster."

"As he left, he set the lowest expectations imaginable for a foreign trip," said Robert Gibbs, senior Obama campaign adviser. "He certainly didn't prove to anyone that he passed the commander-in-chief test."

In a conference call with reporters Tuesday, Gibbs railed Romney over what the Obama campaign described as a gaffe-filled trip, which began Wednesday in the United Kingdom, continued this weekend in Israel and concluded Tuesday in Poland.

Romney took heat for making comments that some groups found offensive. In London, the former Massachusetts governor seemed to question the preparedness of the country for the 2012 Olympic Games, sparking a wave of negative headlines about the candidate in the British press.

"You know it's hard to know just how well it will turn out," he said in an interview with NBC News, explaining that issues with a private security contractor and labor issues were "disconcerting."

Days later, a prominent Palestinian leader labeled Romney's remarks at a Jerusalem fund-raiser "racist." Romney had made a comparison between the per capita GDPs of Israel and Palestinian-controlled areas, pointing to culture as an important factor in economic success.

Palestinian negotiator Sa'eb Erekat said Romney's "racist statements about the Israeli culture being superior to the Palestinian culture reflect someone who needs to be educated, who needs knowledge."

Romney on Tuesday staunchly argued he was not insulting Palestinian culture.

"I'm not speaking about, did not speak about, the Palestinian culture, or the decisions made in their economy," Romney clarified in an interview with Fox News. "That's an interesting topic that deserves scholarly analysis, but I actually didn't address that. I certainly don't plan to address that during my campaign. Instead, I will point out, the choices a society makes have a profound impact on the economy and the vitality of that society."

Team Obama, however, said Romney's dust-ups with the press and various groups overseas suggested the candidate was not ready for the "world stage."

They highlighted then-Sen. Barack Obama's foreign trip as a presidential candidate in the summer of 2008. While Romney was criticized for not taking questions from the traveling press on Monday, Gibbs was quick to point out that Obama held four press conferences and participated in seven network interviews.

To be fair, Romney held at least as many network interviews during his weeklong trip, meeting with CNN, NBC, CBS, FOX and ABC, and granting more than one interview to several of those networks.

Gibbs on the call, however, argued Romney failed to clearly assert his foreign policy positions during the tour, limiting many of his visits to brief photo opportunities with foreign leaders.

"It is clear that the opportunity to credential his beliefs with American voters was nothing short for Mitt Romney of an embarrassing disaster on this trip," Gibbs said.

However, Romney made headlines in Israel when his campaign asserted the candidate would "respect" a decision by Israel to attack Iran's suspected nuclear weapons program. He also talked tough on defending Israel against Iran, making foreign policy points that closely mirror those of the Obama administration.

Responding to the conference call, Romney's campaign defended the candidate and turned the spotlight on Obama, saying the president has "weakened" foreign relationships.

"Mitt Romney will be a president who unapologetically stands up for America and the enduring values of freedom," said Romney spokesman Ryan Williams. "President Obama has weakened America's position in the world and frayed relationships with our closest allies – all while earning effusive praise from the likes of Hugo Chavez. Governor Romney has laid out a foreign policy that will strengthen our interests, ensure our security, and let our friends know they have a partner in the White House."

Not only did Obama's campaign take time to criticize the trip, commentary also came from the White House on Tuesday. After first declining to answer questions about Romney's foreign trip, White House Press Secretary Jay Carney still couldn't help but wade into his own musings on the purpose of a president's overseas tour.

"What I can tell you, having been both a reporter covering foreign trips by candidates as well as incumbent presidents, and now as a staffer, I understand that these are high stakes enterprises – that pulling them off is a lot harder than it looks, that they can be very tense, especially if they are not going well," Carney said in the White House daily press briefing.

Carney avoided making direct comments about Romney's trips, saying he would leave it to Obama's re-election campaign to make a "broad assessment." But Carney continued, emphasizing the weight that these trips carry.

"I think one thing news reports remind us of is that when American presidents, American senators and congressmen and would-be leaders–what they say is placed under a magnifying glass. It carries great impact," he said.

- CNN's Kevin Liptak and Gregory Wallace contributed to this report.