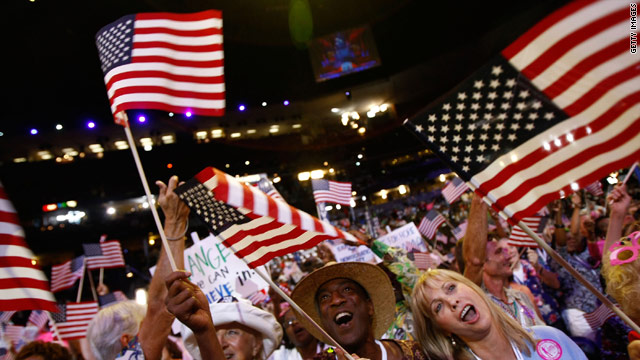 President Obama is to deliver his acceptance speech on Thursday, September 6 at the Bank of America Stadium in Charlotte. The home to the National Football League's Carolina Panthers can seat up to 73,778 and will be the largest venue to hold such an event in nearly 50 years, since John F. Kennedy made his acceptance speech at the Los Angeles Memorial Coliseum in 1960.

Michelle Obama announced the "9-3-1 Pledge" while campaigning for her husband in Greensboro, North Carolina. Completion of 3 shifts, totaling nine volunteer hours, campaigners are "guaranteed a seat at the convention to watch the President" give his speech.

The Time Warner Cable Arena will host the convention on September 4 and 5, seating more than 20,200. The ceremonies however will close at the Bank of America Stadium.

With the convention expecting an average of 6,000 delegates, there is plenty of room for guests to watch the president's acceptance speech. Although the convention is normally open to media, elected officials, and delegates, the campaign is allowing the North Carolina community to view the acceptance speech based on credentials to be announced closer to the kickoff. The stadium is the largest venue in five decades to host the president's acceptance speech, larger than the Denver Bronco's home, the Denver Mile High Stadium, where he accepted the nomination in 2008.

Along with the incentive, Michelle highlighted the importance of voting with the new "It Takes One" initiative, encouraging voters to volunteer to campaign for the presidential elections because "this election will be even closer than the last."

"I have said this before, and I will say it again, he cannot do it alone," the First Lady said. "That was never the promise."