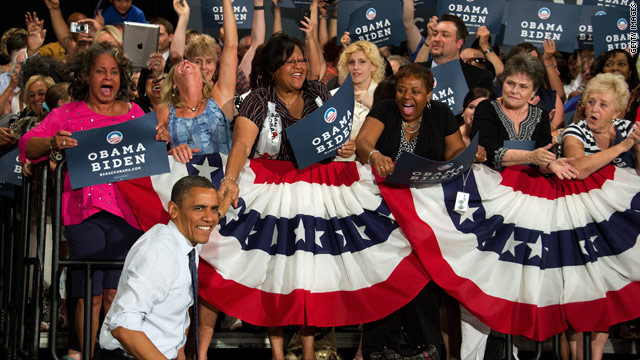 Akron, Ohio (CNN) – Making his 12th visit to the Buckeye State since announcing his campaign for reelection, President Barack Obama on Wednesday continued to hammer home the differences between his tax policies and those of his opponent.

At a morning event in Mansfield, Obama used his speech to highlight a new study by the Urban Institute-Brookings Institution Tax Policy Center that concluded Mitt Romney's tax proposals would provide large tax cuts to the very wealthy while increasing the tax burden on the lower and middle classes.

The Romney campaign quickly pushed back, pointing out that one of the study’s three authors used to work for the White House. Adam Looney, now a senior fellow of The Hamilton Project at the Brookings Institution, served as senior economist for public finance and tax policy with the President’s Council of Economic Advisers from 2009 to 2010.

Speaking to 3,000 people at the John S. Knight Center here in the afternoon, Obama continued the back-and-forth between the two campaigns.

“Just today, an independent, non-partisan organization, they crunched all the numbers. They looked at his plan. This wasn’t me, it wasn’t my team,” Obama said. “This was an independent group. One of the guys who did the analysis used to work for Bush.”

Another author of the study, William G. Gale, was a senior staff economist for the President’s Council of Economic Advisers from 1991 to 1992 under President George H.W. Bush.