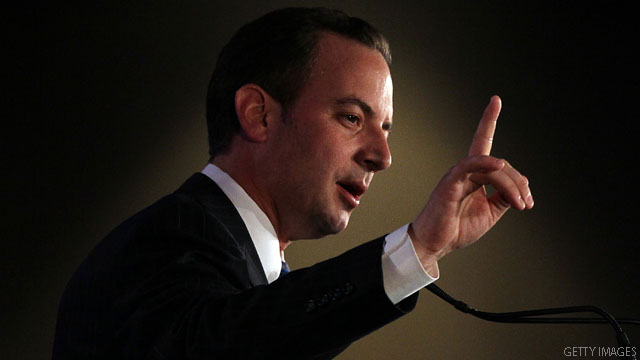 Republican National Committee Chairman Reince Priebus alleged on a Wednesday conference call organized for reporters that the Obama Administration was "failing follow the law under the Presidential Records Act."

Priebus and Rep. Cliff Stearns, a Republican who chairs the oversight subcommittee of the House Energy and Commerce Committee, based their claims on a report published Tuesday by Stearns and other Republicans on his committee which juxtaposes news reports with White House statements on transparency. They charged the Obama Administration - including Obama's campaign manager, who was previously a top White House official - was skirting the records preservation law and creatively reneging on their own transparency pledges.

White House press secretary Jay Carney on Wednesday suggested there was little behind the Republicans' charge in the report and conference call that former top White House official Jim Messina "used his personal email account on several occasions to conduct official business," which the report characterized as a "potential failure to abide by the Presidential Records Act."

Priebus saw the emails differently, saying on a conference call the RNC organized for reporters that the "stunning revelations... show the Obama Administration has not only found loopholes in their own self-imposed transparency rules, they're also failing to follow the law under the Presidential Records Act."

Pressed by a reporter about whether similarities existed between his allegations and those regarding the Bush Administration, Priebus said, "look, I'm not here to relitigate any of those old fights that took place."

Perhaps one of the juciest bites cites a 2010 New York Times report that some lobbyists have met with White House officials "hundreds of times over the last 18 months with prominent K Street lobbyists" at a coffee shop nearby the White House "which is not subject to disclosure on the visitors' log that the White House releases as part of its pledge to be the 'most transparent presidential administration in history.' "

"They [the Obama administration] have been using the Caribou Coffee shop across the street from the White House as an executive branch annex to hold secretive meetings with lobbyists and political cronies," Priebus said on his conference call.

"So we have no way of knowing what insider deals they're cutting with lobbyists with taxpayer money," he charged.

White House spokesman Jay Carney told reporters on Wednesday that he had no details to share "on this specific issue."

On the call, Stearns said, "I think it's obvious that the administration is really talking lofty rhetoric but the bottom line is they're concealing."