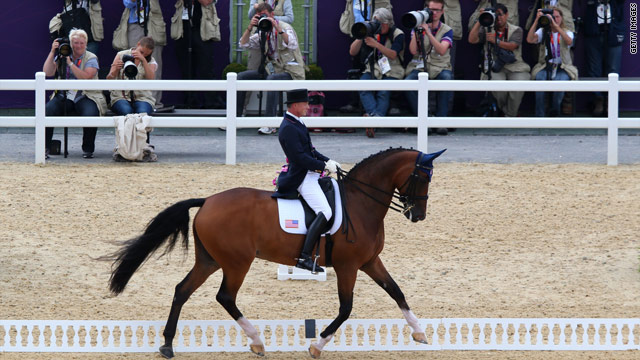 (CNN) – The political horserace turned into an actual horserace Thursday in London. Or at least a horse ballet.

Rafalca, the mare co-owned by Ann Romney, made her Olympics debut at Greenwich Park, competing in the individual Dressage Grand Prix event against a crowded field that included horses from at least seventeen other nations.

Rafalca and her rider Jan Ebeling scored a 70.243 in the first round of competition, which put them in thirteenth place after one day of competition.

The next round takes place Friday.

Rafalca earned her spot on the U.S. Olympic team in June, when she placed third in the Olympic Grand Prix Special Test, held in Gladstone, New Jersey.

Ann began riding horses when she was diagnosed with multiple sclerosis in 1998, and has said the sport has helped lessen the symptoms of the inflammatory disease.

In an interview soon after Rafalca qualified for the London Games, Ann Romney said she was "excited, honestly, to be able to represent the United States."

"I have a horse that is going to be fighting for gold in London and I am very excited about that. Wow! It has been a dream of mine for a long, long time, ever since I was a little girl," Romney continued.

"I do ride this horse, but not in competition," Romney said. "People say, 'Well you can ride at that level,' and I say, "Well…" It's like being the country club pro in one place, and then going to Wimbledon. You don't understand how professional these riders are that are riding at this level. It's quite competitive."

Mitt Romney, however, said as the Olympics began last week that he would not watch Rafalca and Ebeling compete.

"I'm not even sure which day the sport goes on," Romney said on NBC. "She will get the chance to see it, I will not be watching the event."

The Democratic National Committee briefly used video of the Romney's Olympic-bound horse to portray the candidate as "dancing around the issues," but later discontinued using Rafalca because it could be seen as offensive to the GOP candidate's wife.