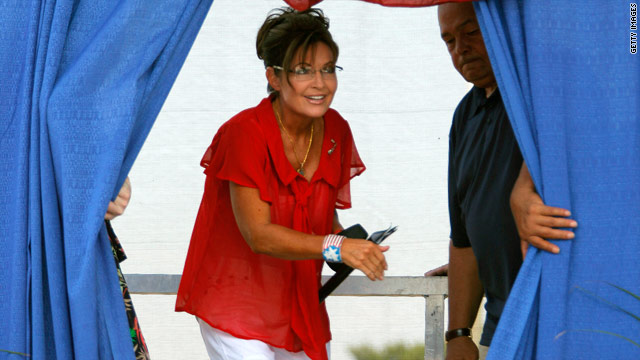 Palin to picnic for Steelman in Missouri

Washington (CNN) - There will be food, drinks and live music Friday in Missouri – and Sarah Palin will be the co-host.

The "BBQ and Picnic with Governor Sarah Palin" will take place in Cleveland, Missouri, less than an hour outside of Kansas City.

It will be Palin's first campaign appearance with Steelman since the former Alaska governor endorsed her some two weeks ago. Since endorsing Steelman, Palin has appeared in a campaign commercial.

"Sarah is an economist who defends our tax dollars – like a mama grizzly defends her cubs," Palin says glowingly of Steelman.

"I am so grateful to have Governor Palin's support, and very excited to say she will be coming into Missouri to participate in this BBQ," Steelman said in a statement. "I know she will excite folks to come out and take a strong stand against the status quo."

As the candidate invited "everyone to attend," her campaign noted in a release that both Steelman and Palin "will be serving the food as a way of saying thank you for all the support and encouraging people to get out and vote."

Steelman is locked in a tight three-way race for the right to be the Republican challenger against Democratic Sen. Claire McCaskill. The GOP senate primary is on Tuesday. Steelman's opponents are businessman John Brunner and Rep. Todd Akin.

Since losing the 2008 presidential race with Sen. John McCain, Palin has shown herself to have a political Midas touch. This cycle, she has endorsed Sen. Orrin Hatch's re-election in Utah, Deb Fischer in Nebraska, and Ted Cruz in Texas. All of them have gone on to win their GOP senate primaries.

But Palin's endorsement record is not without losses. For example, in 2010 her picks lost some of the most high-profile senate races: including Sharron Angle in Nevada, Joe Miller in Alaska and Christine O'Donnell in Delaware.

The Tea Party Express has also backed Steelman. On Thursday, it sent out a fundraising appeal stating, "With all of the political world's focus on the Senate election in Texas, which resulted in Tea Party candidate Ted Cruz's victory, the Missouri race has been over-shadowed. We are sounding the alarm that the election is this Tuesday."