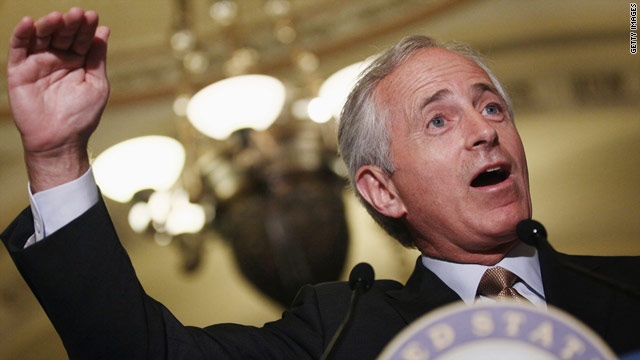 (CNN) - The Tennessee Democratic Party has distanced itself from the winner of its primary in a U.S. Senate race and on Friday encouraged Democrats to write in someone other than Mark Clayton in November.

"Mark Clayton is associated with a known hate group in Washington, D.C., and the Tennessee Democratic Party disavows his candidacy, will not do anything to promote or support him in any way, and urges Democrats to write-in a candidate of their choice in November," the party said.

Clayton's candidacy may mean little to the race, as the nonpartisan political handicappers Cook Report and Rothenberg Political Report rate it as safely in the hands of incumbent Sen. Bob Corker, the Republican.

While he does not have the support of his own party, the endorsements page of Clayton's website shows he has the backing of Eugene Delgaudio, whose group Public Advocate of the United States is listed by the Southern Poverty Law Center as an "Active Anti-Gay Group."

Clayton won less than 30% of the 160,000 votes cast in the Democratic primary, and the party said in a Friday statement that his win was a fluke.

"Many Democrats in Tennessee knew nothing about any of the candidates in the race, so they voted for the person at the top of the ticket," the party said in a statement. "Unfortunately, none of the other Democratic candidates were able to run the race needed to gain statewide visibility or support."

Tennessee Republican Party Chairman Chris Devaney said in a statement Friday that, "What was once a Party with a national voice, the Tennessee Democratic Party, now finds itself in disarray with their struggle to nominate and field legitimate candidates."

Although Clayton is up against Corker, his endorsement from Delgaudio on the Clayton for Senate website indicates Delgaudio has "personally endorsed Mark Clayton for U.S. Senate as the best candidate to defeat Lamar Alexander."

The seat held by Alexander, the state's senior senator and also a Republican, won't be on the ballot until 2014.