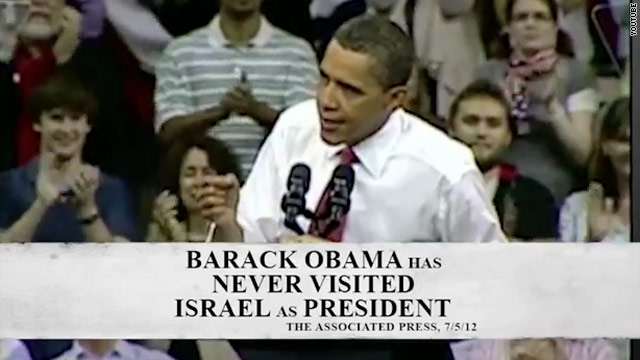 The first ad, "Cherished Relationship," comes exactly one week after the presumptive GOP nominee made a high-profile trip to Israel.

Opening with an attack line, the 30-second spot blasts Obama for having "never visited Israel as president" and chides him for refusing to "recognize Jerusalem as its capital."

The commercial then features footage of Romney appearing in the Jewish state, meeting with Israeli voters, wearing a yarmulke and visiting the Western Wall.

"Mitt Romney will be a different kind of president - a strong leader who stands by our allies," the ad's narrator says. "He knows America holds a deep and cherished relationship with Israel."

The ad ends with a controversial statement Romney made during his speech in front of the Old City's Tower of David last week: “It’s a deeply moving experience to be in Jerusalem, the capital of Israel.”

American policy has long been intentionally vague on the status of Jerusalem. A U.S. law passed in 1995 designates Jerusalem as the capital of Israel, and stipulates the American Embassy should move to the city from Tel Aviv. The past three presidents, however, have signed waivers suspending the law, citing security and diplomatic concerns.

In the second commercial, "It's Just Not Getting Better," Romney's campaign focuses on the economy and blames the president for July's job numbers, which came out Friday and revealed an unemployment rate uptick - to 8.3%, from 8.2% last month - as households claimed they lost 195,000 jobs in July.

However, the ad does not mention that the economy added 163,000 jobs, far more than in recent months.

The government's monthly jobs report comes from two separate surveys: one that looks at employer payrolls and one that questions households. Those two reports went in opposite directions in July, confusing the overall reading on the job market.

"Under Obama's economy, it's just not getting better," the ad's narrator says.

The president, however, touted the new job numbers Friday, focusing on the jobs created in July.

"That means that we've now created 4.5 million new jobs over the last 29 months and 1.1 million new jobs so far this year," Obama said in remarks in Washington at the Eisenhower Executive Office Building. "Those are our neighbors and family members finding work and the security that comes with work."

Pivoting, the ad says Romney has a plan for a "stronger middle class" that includes "more jobs and more take-home pay."

"It's a plan that works for America," the narrator concludes at the end of the spot.

This week Romney unveiled his promise to create 12 million new jobs in his first four years in office if elected. While some economists have raised doubts about his ability to achieve that goal because it would require adding 250,000 jobs a month, Romney told CNN on Saturday that it's achievable.

"That is what happens in a normal process. When you come out of the kind of recession we've had you should see this kind of creation," he told CNN Chief Political Analyst Gloria Borger.

Last week, Romney's campaign and the Republican National Committee bought $8.2 million for a week of ad time beginning Wednesday and running through Tuesday in eight battleground states, according to a Republican source tracking ad buys.