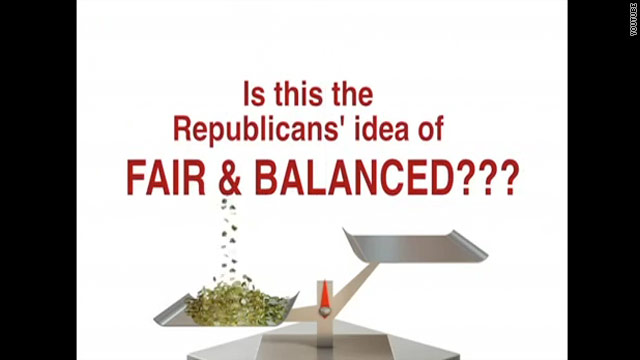 (CNN) – The liberal nonprofit group Americans United for Change teamed up with the American Federation of State, County and Municipal Employees labor union to release a new television ad Monday, attacking Republicans for opposing tax increases on the very wealthy.

Totaling $280,000, the ad buy will run on cable nationwide Monday and Tuesday, in addition to five spots tailored to attack five Republican members of Congress who the groups deem “vulnerable” this election year. The individualized ads will run in the lawmakers' respective states.

“In America, everyone should have a fair shot at success,” the ad’s narrator says, over animation of scales. “So why are the Republicans trying to tip the scales even more for big corporations and the richest two percent?”

At the heart of the ad is President Barack Obama’s recently revitalized proposal to end the Bush-era tax cuts on income above the first $250,000 of a household’s income, or $200,000 for an individual. The president calls for the renewal of the tax cuts for those making less than the proposed threshold, saying it would affect 98% of Americans.

The Democratic-controlled Senate passed a measure late last month in favor of the plan, while the Republican-controlled House passed a bill last week that would extend the tax cuts for all Americans, not just those under the threshold. Both bills were considered symbolic, as neither had much chance of passing the other chamber.

“The Republicans just voted to give people like Donald Trump a tax break worth $150,000,” the ad’s narrator says. “That way, the Republicans’ rich friends can just keep on getting richer.”

With each new sentence, the ad shows one scale on the animated balance tipping lower and lower with coins. The scale finally tips over and crashes, as the narrator concludes saying, “And the rest of us?”

Republicans argue that because a majority of small-business owners are taxed at the individual rate, the president’s proposed tax hike could severely damage economic growth.

"Look, I know the very wealthy are going to do just fine, whoever is elected," Mitt Romney said in an interview Saturday with CNN Chief Political Analyst Gloria Borger. The presumptive GOP presidential nominee added that it was the middle class and the poor whom he's most concerned about. "They need our help. They need our help with good jobs. That's going to only come if we encourage this economy by keeping the burdens on small business down."

For the five members of Congress targeted in the new ad buy, each ad will feature the name and picture of the respective lawmaker. They are: