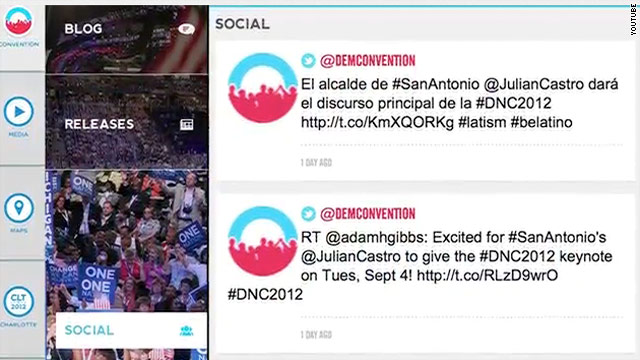 (CNN) - The Democratic National Convention says it’s launching its first ever official convention mobile app for smart phones to give what it says will be more ways for Americans to engage during the convention, which will be held in Charlotte, North Carolina the first week of September.

The Democratic National Convention Committee says the app will hit stores Tuesday and will provide more ways for people to participate in the convention either in person or virtually.

"With the launch of this mobile app, Democrats are taking another step in making this the most open and accessible convention in history," DNCC CEO Steve Kerrigan said in a statement. "Whether you're joining us in person for the convention in Charlotte, or engaging virtually from anywhere in the country, there's something for everyone in this app. From live-streaming convention speeches to finding a great restaurant in the Queen City this app puts the 2012 Democratic National Convention at your fingertips."

The DNC app follows the releases last week of mobile apps by the campaigns of President Barack Obama and Republican challenger Mitt Romney.