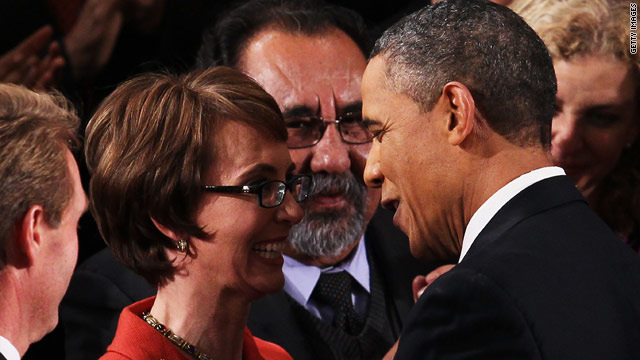 ATTORNEY GENERAL ERIC HOLDER DEFENDS PLEA DEAL IN A STATEMENT: “It is my hope that this decision will allow the Tucson community, and the nation, to continue the healing process free of what would likely be extended trial and pre-trial proceedings that would not have a certain outcome. The prosecutors and agents assigned to this matter have done an outstanding job and have ensured that justice has been done. In making the determination not to seek the death penalty, I took into consideration the views of the victims and survivor families, the recommendations of the prosecutors assigned to the case, and the applicable law.”

MARK KELLY’S REACTION: "Gabby and I have been in contact with the US Attorneys' Office throughout this process. We don't speak for all of the victims or their families, but Gabby and I are satisfied with this plea agreement. The pain and loss caused by the events of January 8, 2011 are incalculable. Avoiding a trial will allow us – and we hope the whole Southern Arizona community – to continue with our recovery and move forward with our lives."

JUST IN TO CNN .... In response to the Drudge Report indicating CIA Director David Petraeus may be under consideration to be Romney’s running mate, CIA Spokesman Preston Golson said, “Director Petraeus feels very privileged to be able to continue to serve our country in his current position, and as he has stated clearly numerous times before, he will not seek elected office.”

Leading HuffPo: Obama Super PAC Waiting To Unload On Mitt Romney's Embrace Of Paul Ryan Budget
Bill Kristol and Stephen Hayes caused a stir this week when they encouraged Mitt Romney to pick Rep. Paul Ryan (R-Wis.) or Sen. Marco Rubio (R-Fla.) as his running mate…. "If Ryan’s budget is going to be a central part of the debate over the next three months, who better to explain and defend it than Paul Ryan?" Kristol and Hayes wrote. – Jon Ward

Leading Politico: Myth of the small donor
Roughly 2.5 million people have kicked in $200 or less to the various committees helping their candidate win the White House. But those 2.5 million people account for less than 18 percent of the total money haul. – Kenneth P. Vogel

Leading The New York Times: Outside Group Targets Obama in $25 Million Ad Campaign
The swing-state campaign from the conservative Americans for Prosperity, financed by the Koch brothers, shows the power in this election of a small number of wealthy donors. – Jeremy W. Peters

Which U.S. president wrote about being mocked for his role in the opening ceremony of the Olympics?

"People ask me how I write music. I look at those in the United Nations who simultaneously translate speeches into another language. That amazes me. Just as they are saying something, people are speaking it in Spanish or German or Japanese. I think that's what musicians do, but we translate the words emotionally into music." - Marvin Hamlisch to Otterbein University in 1996

We were trying to write about politics today but we couldn’t stop humming.

One. Singular Sensation. … Every Move that he makes.

We paused when we heard the news on CNN today that Marvin Hamlisch passed away at the age of 68.

Hamlisch was one of the best American composers of our lifetimes – getting into Juilliard at age 6 and continuing to delight audiences with his love of melodies. So, it’s only natural that we pause amid the political summer to think about his particular American story.

The son of Viennese immigrant band leader, Hamlisch sang to presidents, went on tour with Streisand, and celebrated Carly Simon’s “Yamaha” piano in a way that made you want one. He has won every major American art award, becoming one of a very few Americans who has earned a Pulitzer in addition to a Tony, Grammy, Emmy and Oscar.

In fact, in 1974, he won three Oscars in one night: two for "The Way We Were" (original score and song) and one for "The Sting" (adapted score). Hamlisch loved to regale audiences in a question-and-answer session that let him reveal his great wit, though he will be most remembered for his melodies.

Hamlisch provided the music for James Bond’s “The Spy Who Loved Me” and Robert Redford’s “Ordinary People,” touching Hollywood young and old. When he died, he was still listed as the principal Pops conductor for the symphony orchestras of Pittsburgh, Milwaukee , Dallas, Pasadena, Seattle and San Diego. The actor Jason Alexander, of “Seinfeld” fame, summed up Hamlisch’s special place in a tweet this morning reacting to the news: “The music of Heaven got sweeter today.”

But it was Hamlisch himself who best described the role of the arts in a world rife with politics and conflict. "Music is a great communicator. It may be one of the best ambassadors we have between countries and cultures," Hamlisch told the Wichita Eagle in 2010. "Remember when Van Cliburn played some Russian music at the White House for (then Soviet leader Mikhail) Gorbachev? The smile on his face showed we had subtly bridged a gap."

So perhaps Boston and Chicago can bridge their own gaps today, with a little melody?

- Romney Hood vs. Obamaloney–
THE REPUBLICAN CANDIDATE FIRES BACK IN AN INTERVIEW WITH FOX NEWS AT THE PRESIDENT’S CHARGE OF “ROMNEY HOOD,” ROBIN HOOD IN REVERSE: “If I were to coin a term it would be ‘Obamaloney.’ He is serving up a dish that is in contradiction to the truth.”

GUT CHECK FLASHBACK… ROMNEY, EARLIER TUESDAY IN ELK GROVE, ILLINOIS: “When the president of the United States says if you have a business you didn’t build it someone else did that – I say baloney. The people here in Acme are the ones who built this business.”

OBAMA AT A FUNDRAISER IN STAMFORD, CONNECTICUT ON MONDAY EVENING: “He’d ask the middle class to pay more in taxes so that he could give another $250,000 tax cut to people making more than $3 million a year. It’s like Robin Hood in reverse. It’s Romney Hood.”

DEMOCRATIC NATIONAL COMMITTEE SPOKESMAN BRAD WOODHOUSE ON A CONFERENCE CALL, AUGUST 2: “A tax plan that is Robin Hood in reverse that tackles money from the lower income to provide greater tax benefits for people like him.”

SUBJECT OF EMAIL TO REPORTERS FROM BILL BURTON OF PRIORITIES USA ACTION ON AUGUST 1: “Romney-hood”

- Lieberman wants vision from Obama, Romney -
SEN. JOE LIEBERMAN, WHO DESCRIBES HIMSELF AS AN INDEPENDENT DEMOCRAT, ON CNN’S “STARTING POINT:” “Part of what our country needs now is a healthy dose of vision about what both of these candidates will do if they get elected…. We're running the risk that most people, more than half of the people who go to vote in November, will be voting against the other candidate instead of voting for the candidate. … That's bad. First because it doesn't give you any confidence about what their candidate is going to do for the country. Secondly, you know, it's as if there were two department stores in a town. And each department store has spent all its advertising budget attacking the other department store, the net effect would be that people would look for a third place to shop. This is not a department store we're talking about here. It's the future of our country. So I - it's part of why I'm not running again, honestly, campaigns got too negative and much too expensive and much - too much time spent raising a money.”

- Carney bags Petraeus VP idea -
WHITE HOUSE PRESS SECRETARY JAY CARNEY TO REPORTERS ON TUESDAY: “I can say with absolute confidence that such an assertion has never been uttered by the president. And again, be mindful of your sources.”

- Romney calls for a moment of silence -
AT A CAMPAIGN EVENT IN ELK GROVE, ILLINOIS: “I know we come today to talk about politics but I would like to have a moment of silence in honor of the people who lost their lives in Wisconsin in that tragic, tragic shooting at the Sikh temple. The tragedy is even more profound because the Sikh religion and the Sikh people are such peaceable, loving individuals. And I think it is also more tragic because the shooter was apparently someone who was motivated by hate – hate based on race, hate based on religion. For all those reasons this is something which touches us very deeply. In our moment of silence I certainly pray that God might rest the souls of those who lost their lives and comfort those that mourn.”

None other than the actor-turned-president, Ronald Reagan, was accused of botching his starring role in the Olympics opening ceremony in Los Angeles. Reagan logged in his diary on July 28, 1984, "Lv. for Calif. to open the Olympics then off to the ranch. Met Nancy then addressed our Am. team at Olympic Village & on to the Coliseum. The opening ceremonies were magnificent. My 2 sentences to open the games I thought were written in reverse. The applause hereby declare open etc. was 1st followed by a second line about the 23rd Olympiad. I asked permission to change the order & did so. The press having a copy of the lines as written are gleefully tagging me with senility and inability to learn my lines."

Anyone can sign up for Gut Check by emailing gutcheck@cnn.com