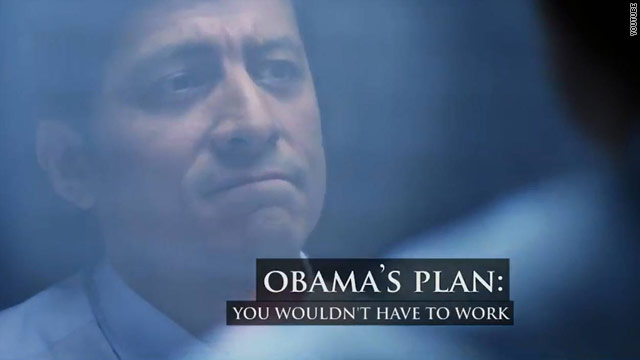 (CNN) – Changes to welfare pushed by President Barack Obama's administration are providing his Republican challenger Mitt Romney with material for a new round of attacks, including a television ad released Tuesday.

The changes, which would allow states greater flexibility in administering their welfare-to-work programs, came in a directive issued by the Department of Health and Human Services in mid-July. At the time, some Republicans claimed the new rules amounted to a "gutting" of work requirements for welfare recipients, which were a central element of the bipartisan welfare reform law signed by President Bill Clinton in 1996.

In Tuesday's ad from the Romney campaign, an announcer points to Clinton's achievement, and claims Obama's directive would "gut welfare reform by dropping work requirements."

"Under Obama's plan, you wouldn't have to work and wouldn't have to train for a job. They just send you your welfare check," the announcer continues. "And welfare to work goes back to being plain old welfare."

"Middle-class Americans are working harder and harder to make ends meet," Saul wrote. "Under President Obama, they have fewer jobs and less take-home pay. And now, President Obama wants to take their hard-earned tax dollars and give it to welfare recipients without work requirements."

Romney, she wrote, "would restore the work requirement in the welfare law so that recipients know the dignity of work instead of the dependency of a handout."

The Obama administration directive, issued July 12, allows individual states to experiment with changes to their welfare-to-work programs, which are federally funded. The intent, according to the directive, is to "challenge states to engage in a new round of innovation that seeks to find more effective mechanisms for helping families succeed in employment."

The welfare-to-work program affected by the directive – the Temporary Assistance for Needy Families (TANF) – was created by the welfare reform law signed by Clinton in 1996. That measure was considered a win for conservatives, who long pushed for a provision that required work training for Americans receiving government assistance.

"Let me say that this advertisement is categorically false and it is blatantly dishonest," Carney said. "This administration's policy will strengthen the program by giving states the opportunity to employ more effective ways."

He called Republican criticism of the changes "outrageous," pointing to past support from Republican governors – including Romney – for waivers to the federal requirements.

"The ad is particularly outrageous as Governor Romney himself with 28 other Republican governors supported policies that would have eliminated the time limits in the welfare reform law and allowed people to stay on welfare forever. Those are not standards the president supports," Carney said.

In 2005, Romney signed a letter along with 29 other state governors to then-Senate Majority Leader Bill Frist, calling for greater state flexibility in managing their TANF programs.

"Increased waiver authority, allowable work activities, availability of partial work credit and the ability to coordinate state programs are all important aspects of moving recipients from welfare to work," the letter read.

"Because Massachusetts had implemented reforms of its own shortly before the federal reforms of 1996, it was actually exempt from many of the federal requirements when Romney took office as governor," Chen wrote. "But nevertheless, facing an overwhelmingly Democratic legislature in one of the most liberal states in the country, Romney vetoed efforts to weaken work requirements and he pressed repeatedly to instead strengthen them and bring them in line with federal standards."

Obama's re-election campaign responded to the ad in a statement Tuesday, accusing Romney of "not telling the truth."

"The truth is that the President is giving states additional flexibility only if they move more people from welfare to work – not fewer. As Governor, Romney asked for even greater flexibility to waive the central part of the law by letting people receive benefits for an indefinite period and as HHS has said, his waiver request wouldn't be approved today because it weakened the law too much. By falsely attacking a policy that both he and his Republican allies have supported for years, Romney is once again flip flopping on a position he took in Massachusetts, and demonstrating that he lacks the core strength and principles the nation needs in a President," Obama campaign spokeswoman Lis Smith said in a statement.