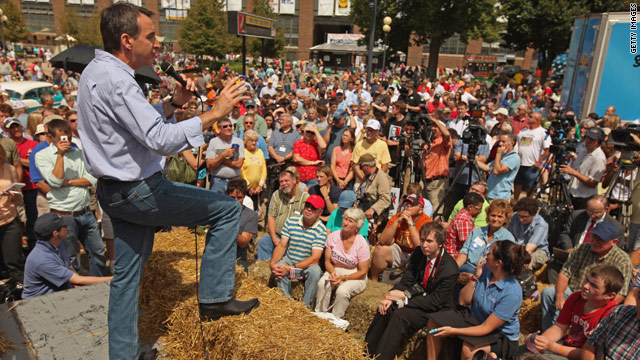 BREAKING … OBAMA, ROMNEY AGREE OVER BOY SCOUTS: President Obama joined Mitt Romney in opposing discrimination by the Boy Scouts of America against gay Scouts. White House spokesperson Shin Inouye tells CNN’s Jessica Yellin: “The President believes the Boy Scouts is a valuable organization that has helped educate and build character in American boys for more than a century. He also opposes discrimination in all forms, and as such opposes this policy that discriminates on basis of sexual orientation.” Mitt Romney said in a 1994 debate in the state of Massachusetts that "I support the right of the Boy Scouts of America to decide what it wants to do on that issue. I feel that all people should be able to participate in the Boy Scouts regardless of their sexual orientation."

Yet, despite immense media attention, the ad has not yet run on television as a paid spot. Reached for comment, Priorties USA tells CNN that the ad "hasn't started running yet but will soon."

Leading CNNPolitics.com: Romney's short list: Pawlenty campaigns hard for ticket
Tim Pawlenty of Minnesota is a short-list contender to share the ticket with Mitt Romney - in part because he is in some ways very much like Romney. But perhaps more so because he is so many things the GOP's presumptive nominee is not. – John King LINK

Leading Drudge: ‘We’ll Know Soon Enough’
The former Minnesota governor is believed to be on Mitt Romney’s short list of running mates and there is speculation that the choice could be made any day. – Shushannah Walshe LINK

Leading HuffPo: Dirty War Profiteer
In 1983, Bill Bain asked Mitt Romney to launch Bain Capital, a private equity offshoot of the successful consulting firm Bain & Company. After some initial reluctance, Romney agreed. The new job came with a stipulation: Romney couldn't raise money from any current clients, Bain said, because if the private equity venture failed, he didn't want it taking the consulting firm down with it. – Ryan Grim and Cole Stangler LINK

Leading Politico: Paul Ryan veep prospects split GOP
As Mitt Romney’s vice presidential selection nears and buzz about Rep. Paul Ryan’s prospects builds, a split is emerging among Republicans about whether the choice of the House Budget chairman and architect of the party’s controversial tax and spending plan would be a daring plus for the ticket or a miscalculation that would turn a close election into a referendum on Medicare. - Jonathan Martin, Jake Sherman and Maggie Haberman LINK

How many times has the United States hosted the Olympic Games?

While President Obama took to the stump in Denver and Grand Junction today, Mitt Romney took the lead in the state of Colorado, according to the new Quinnipiac/New York Times/CBS poll out today. The poll showed Romney ahead of Obama, 50% to 45%.

Republican political consultant and former Colorado Republican state chairman Dick Wadhams told us he didn’t buy any notion of a big swing in the state, “I don't believe the fundamental dynamic has changed in Colorado in this presidential race. Republican and unaffiliated women in the Jefferson-Arapahoe suburbs of Denver are the swing voters who will determine who carries Colorado, just as they have in every competitive race for president, governor and senator for decades. I believe that these voters have largely decided President Obama has failed on the economy and want to vote for an alternative but Gov. Romney has not made the sale yet.”

Colorado Democratic consultant Laura Chapin, agreed women, especially in Jefferson County, would be key, but took direct issue with the poll. “From what I've seen, the poll doesn't represent an accurate picture of the Colorado electorate – for instance, only 29% of the sample was under 45. In 2008, that number was 47%. It also under-represents Hispanics and appears to over-represent older men,” Chapin told us. “There are 114,000 more women than men registered voters in Colorado, including almost 17,000 in the key swing county of Jefferson. If the gender gap holds, and I think it will, the president has an advantage.”

The Colorado poll shows Obama leading Romney among women 51% to 43%. Chapin pointed to a local issue that could help rally this key constituency to the polls: “The anti-choice, personhood measure, which propelled women to the polls in 2010 and helped elect Sen.(Michael) Bennet (D-Colorado), is back on the ballot. It is a huge liability for Mitt Romney in Colorado,” Chapin said.

Wadhams, however, thinks the Republicans can feel good about the fact that Romney does lead in the state despite the very negative onslaught from the Obama ad machine. “I am intrigued that the Obama campaign has been hitting Romney hard, not only Bain but as being ‘anti-woman,’ and yet The New York Times poll showed him leading. This suggests they do not believe Bain disqualifies Romney and that the Bennet-like 2010 attack isn't going to be as effective in 2012,” Wadhams said. But as a veteran, Wadhams knows a lot can happen in the next 90 days, “These swing voters are still very much in flux and will be through the election.”

The question then becomes how to speak to those swing voters. The stat from the poll that stopped us in our tracks was this one: Nine out of 10 likely voters in Colorado, as well as the two other swing states surveyed, Virginia and Wisconsin, said they would not change their minds before Election Day.

It makes you wonder about all the money and time the campaigns will spend in the next 90 days for that one in 10 with a mind still open to political persuasion.

- Reading Pawlenty’s tea leaves -
TIM PAWLENTY ANSWERS SUPPORTERS’ QUESTIONS WHILE CAMPAIGNING FOR ROMNEY IN JACKSON, MICHIGAN - SUCH AS “Are you going to come back to Michigan when you're vice president?” PAWLENTY: “I've been back to Michigan a fair amount. But as to the vice presidential thing, we'll know soon enough.” AND: “What's your schedule Friday?” “My schedule Friday is I'll be in New Hampshire.”

- Romney not ‘stand(ing) up to extreme voices in his own party,' Fluke says -
GEORGETOWN LAW GRADUATE SANDRA FLUKE INTRODUCES OBAMA IN DENVER: “He defended my right to speak without being attacked and he condemned those hateful words. But, you know, Mr. Romney could only say that those weren't the words he would have chosen. Well, Mr. Romney, you're not going to be the candidate we choose.”

- How to run in Montana: Tester took on Obama, his ad says -
A NEW AD FROM SEN. JON TESTER OF MONTANA, A DEMOCRAT WHOSE RACE IS RATED BY CHARLIE COOK AS A “TOSS-UP:” “Why are out-of-state corporate super PACs attacking Jon Tester? Because Jon always puts Montana first. Jon was the only Democrat who voted against both the Wall Street and auto bailouts. Jon took on the Obama administration to delist wolves, saying that's what's right for Montana. Voted for the Keystone Pipeline to create jobs and energy security. And voted in favor of a balanced budget amendment. Jon Tester. Doing what's right for Montana. Always."

- Clinton, former Obama critic, weighs in -
AT 10:33 PM TUESDAY, FORMER PRESIDENT BILL CLINTON ISSUES A RESPONSE TO A ROMNEY CAMPAIGN AD HITTING OBAMA OVER WELFARE: “Gov. Romney released an ad today alleging that the Obama administration had weakened the work requirements of the 1996 Welfare Reform Act. That is not true. … The Romney ad is especially disappointing because, as governor of Massachusetts, he requested changes in the welfare reform laws that could have eliminated time limits altogether. We need a bipartisan consensus to continue to help people move from welfare to work even during these hard times, not more misleading campaign ads.”

- Gingrich, former Romney critic, responds -
FORMER HOUSE SPEAKER NEWT GINGRICH TO REPORTERS ON A CONFERENCE CALL 12 HOURS LATER: “There's just a remarkable difference between Clinton and Obama, and I actually think in many ways … Obama is the anti-Clinton. Clinton was trying to move the party to the center, Obama has moved it to the left.”

The London 2012 Olympics are of the 30th Olympiad and mark the first occasion a city hosting the games has had the honor three times (previously in 1908 and 1948).

Congratulations to @TboydaG, who joins the Gut Check Winner’s Circle.

An honorable mention goes to CNN’s own Peter Hamby for winning Gut Check’s Favorite Out of Office Reply, “I will be out of the office until Monday, August 13 and checking email sporadically. If it's urgent, or you know the identity of Mitt Romney's running mate, just call me.”

Anyone can sign up for Gut Check by emailing gutcheck@cnn.com