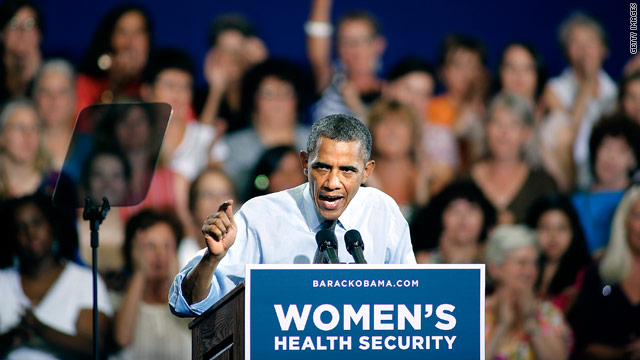 Denver (CNN) – At the first stop of a two-day campaign trip through Colorado, President Obama made his pitch to female voters, telling a crowd here that on women's health issues his opponents "want to take us back to the policies more suited to the 1950's than the 21st century."

Standing under a sign reading "Women's Health Security," Obama was surrounded by female supporters onstage at the Auraria Event Center and used his remarks to repeatedly criticize likely GOP nominee Mitt Romney for failing to stand up for the issues important to women.

"Mr. Romney is running as the candidate of conservative values. There's nothing conservative about a government that prevents a woman from making her own health care decisions," the president said to a predominantly female crowd of 4,000 people near downtown Denver. "We're not going back to the days when it was acceptable to charge women more than men for health care."

Referencing a Romney campaign conference call earlier this year during which the campaign declined to take a position on the Lilly Ledbetter Fair Pay Act, Obama boasted that it was the first bill he signed into law, showing that fair pay is a top priority for him.

The president also highlighted his two female nominees to the U.S. Supreme Court. While remarking on the effect that the Court could have on women's rights in the future, Obama pointed out that Wednesday is the three-year anniversary of the day Justice Sonia Sotomayor took her seat.

"Yesterday was the two-year anniversary of Elena Kagan taking her seat on the Supreme Court," Obama continued. "So let's be very clear. The next President could tip the balance of the Court in a way that turns back the clock for women and families for decades to come."

Obama was introduced by Georgetown University Law Center graduate Sandra Fluke, who was at the center of a controversy last year after testifying to Congress about the importance of providing birth control to employees of religiously affiliated institutions.

"We have a president in President Obama who understands the importance of women getting access to the care they need when they need it, and we must remember that we have another candidate, Mitt Romney who wants to take that all away," Fluke said.

The Obama campaign released a web video on Wednesday morning featuring actress Elizabeth Banks who talks about the importance of Planned Parenthood and the Obama administration's policies on women's health. The campaign is also airing television ads in Colorado and other battleground states, calling Romney "out of touch" on women's issues.

In a Quinnipiac/CBS News/New York Times poll of likely Colorado voters released on Wednesday, Obama leads Romney by 8 points with women, but trails by seventeen points among men. This number is down from 2008 when Obama beat GOP nominee John McCain by 15 points among women in Colorado, according to CNN exit polls.

Women made up roughly 53% of the national electorate in 2008, and voted for Obama over McCain by a margin of 13 points.