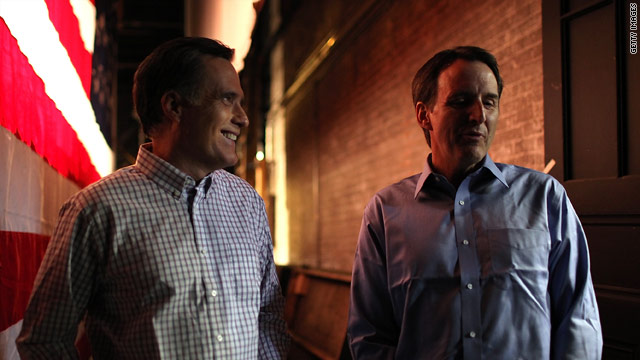 (CNN) - Former Minnesota Gov. Tim Pawlenty, who's rumored to be among the top contenders for Mitt Romney's running mate, campaigned for the presumptive GOP nominee in Michigan Wednesday and beat back V.P questions.

At a Romney campaign office opening in Jackson, a woman in the crowd asked Pawlenty: "Are you going to come back to Michigan when you're vice president?"

The former governor replied that he's been back to Michigan "a fair amount," but "as to the vice presidential thing, we'll know soon enough."

Hank Choate, chair of the Jackson County GOP, asked him what his schedule would be on Friday, as some have speculated Romney's running mate announcement could come as early as the end of the week.

"My schedule Friday is I'll be in New Hampshire," Pawlenty said.

Weighing in further, Pawlenty said Romney has a crop of "unbelievably talented wonderful people" to choose from for his vice presidential nominee.

"You've got this tremendous new governor in Nevada Brian Sandoval. If you haven't heard of him, you will. He's terrific. Susanna Martinez in New Mexico, the first Hispanic Republican woman governor in the history of the country. Bobby Jindal in Louisiana, tremendous reformer, outstanding governor and leader. Marco Rubio, the rising star and senator from Florida," Pawlenty said.

Pawlenty further added a new name to the V.P. speculation, saying Gen. David Petraeus, director of the Central Intelligence Agency, would be a good pick–one day after a spokesman for the CIA shot down reports that Petraeus would consider running for elected office.

The Petraeus suggestion originally came Tuesday from The Drudge Report, which is very popular and influential among conservatives.

"The list goes on and on and on," Pawlenty said. "So as you look to the future of our party and movement it's very, very bright. There's tremendous next generation talent coming up."