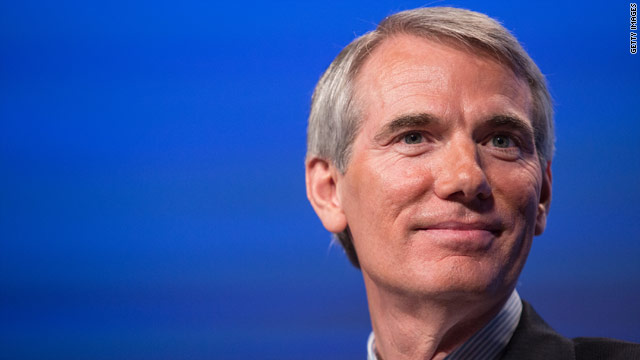 Portman stumps for Romney, 'so goes Colorado, so goes the nation'

The Ohio senator is shadowing Obama's two-day, four-city swing in the state.

Portman is on a bus tour through Colorado hopping on and off Romney's campaign bus to greet and thank volunteers and supporters at the presumptive GOP nominee's campaign offices and other locations.

Portman is assumed to be on Romney's vice presidential shortlist. The candidate's V.P. pick could be announced as soon as the end of this week, fueling running-mate speculation and hype around Portman's schedule in Colorado.

So far, the Romney campaign has only granted that the announcement will happen before the third day of the Republican National Convention in late August. Earlier Wednesday, however, the candidate's mobile smart phone application "Mitt's VP"–said to be the way the campaign will announce the news–sent out an alert that didn't contain the V.P.'s name, only a message for supporters.

A loyal Romney surrogate, Portman told a small crowd of supporters in Lakewood, Colorado that recent polling in the state speaks for itself.

"President Obama is in Colorado today being greeted by a poll put out by CBS, the New York Times, Quinnipiac showing Mitt Romney winning Colorado by five points," said Portman, adding that the data shows a trend in favor of Romney.

According to the poll Romney also has a ten point advantage over Obama in Colorado when asked which candidate would do a better job fixing the economy.

"He said, you know look, if you don't have fresh ideas he said, you turn to stale tactics and attack your opponent. He said that if you don't have a record to run on, then you make your opponent unacceptable. He said you make a big election about small things," said Portman. "That was President Obama four years ago. Folks, that's exactly what he's doing today in Colorado and in his campaign, negative attack ads, trying to distract people from his record."

Portman continued, "The facts are that he made certain commitments and promises and he hasn't kept them."

Colorado has nine Electoral College votes and is considered a state that could swing either right or left and key to winning November's election.