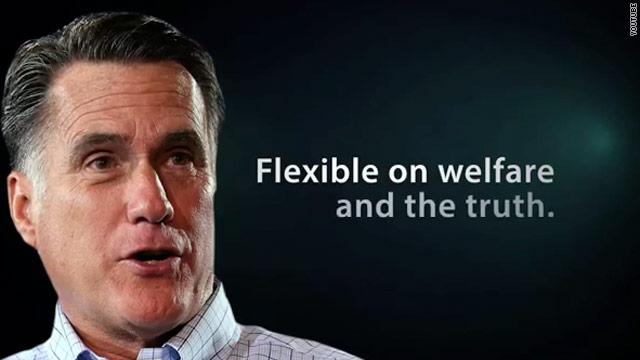 Welfare debate gets back to work

(CNN) - The debate over Mitt Romney's latest welfare claims against President Barack Obama continued Wednesday, with both campaigns releasing dueling web videos and spokespersons from each team holding their ground in the snowballing battle.

An independent fact-checking organization, PolitiFact, rated a new Romney ad as "Pants on Fire" Tuesday, following calls from the Obama campaign labeling the spot as "dubious" and "completely false."

The ad attacks a recent Obama administration directive issued via memo on July 12. The directive allows individual states–which have received a waiver from the Health and Human Services Department–to experiment with changes to their federally-funded welfare-to-work programs. The intent, according to the directive, is to "challenge states to engage in a new round of innovation that seeks to find more effective mechanisms for helping families succeed in employment."

The program affected by the directive – the Temporary Assistance for Needy Families (TANF) – was created by the bipartisan welfare reform law signed by former President Bill Clinton in 1996. That measure was considered a win for conservatives, who long pushed for a provision that required work training for Americans receiving government assistance.

In Tuesday's ad from the Romney campaign, a narrator points to Clinton's achievement, and claims Obama's directive would "gut welfare reform by dropping work requirements."

Romney doubled down on the welfare charge Wednesday, highlighting how when Clinton signed the bipartisan welfare reform bill into law in 1996, then-Illinois State Senator Obama opposed it.

"Back at that time, then-Senator Obama was opposed to putting work together with welfare," Romney said during a campaign speech in Des Moines. "Just a few days ago, he put that original intent in place. With a very careful executive action he removed the requirement of work from welfare. It is wrong to make any change that would make America more of a nation of government dependency."

Romney neglected to mention that Obama had changed his position since then. When he ran for president in 2008, Obama said he supported the landmark legislation that required work training for Americans receiving government assistance.

"It worked better than I think a lot of people anticipated," Obama said at Pastor Rick Warren's Saddleback forum four years ago. "And one of the things that I am absolutely convinced of is that we have to have work as a centerpiece of any social policy. Not only because, ultimately people who work are going to get more income. But the intrinsic dignity of work, the sense of purpose."

Newt Gingrich, who worked with Clinton to pass the reform in 1996, further bolstered the welfare offensive Wednesday on behalf of Romney. On a conference call with reporters, the former House speaker hurled charges at the Obama administration, saying it was using "radical" methods to alter the welfare-to-work program as part of a liberal agenda.

He also used the opportunity to drive a wedge between the 44th and 42nd presidents.

"There's just a remarkable difference between Clinton and Obama," Gingrich said. "In many ways, Obama is the anti-Clinton."

But Obama's campaign, the White House and former President Bill Clinton all pounced on the new Romney commercial Tuesday, saying the claims were false and misleading.

But Obama's campaign, the White House and former President Bill Clinton all pounced on the ad Tuesday, saying the claims were false and misleading.

"The Romney ad is especially disappointing because, as governor of Massachusetts, he requested changes in the welfare reform laws that could have eliminated time limits altogether," Clinton wrote in a statement, making reference to a 2005 letter signed by Romney and 28 other Republican governors to then-Senate Majority Leader Bill Frist, calling for greater state flexibility in managing their welfare programs.

Romney spokeswoman Andrea Saul, however, indicated Wednesday the ad would not be going away anytime soon and defended the campaign's claims.

She continued: "They can issue blog posts, and have surrogate statements saying that's not what they meant, but the memo still stands and hasn't been revoked."

PolitiFact, however, suggests the Romney campaign misinterpreted the "waiver" provision outlined in the HHS memo.

Translating the document, Liz Schott, a senior fellow at the left-leaning Center on Budget and Policy Priorities, told PolitiFact that the memo meant, "If you can do a better job connecting people to work, we would consider waiving certain parts of the performance measures and use alternate measures."

Obama's re-election team also launched a new web video Wednesday, citing reports and fact-checks that label the Romney claims as untrue. It highlights the part of the new directive requiring that governors "must commit that their proposals will move at least 20% more people from welfare to work" in exchange for more flexibility granted by the waiver.

"I think that I would take President Clinton's word over Andrea Saul's word any day," Cutter said, pointing out the 20% requirement in the new directive. "She apparently hasn't read the memo, but that's not unusual for the Romney campaign. They don't care about the facts."