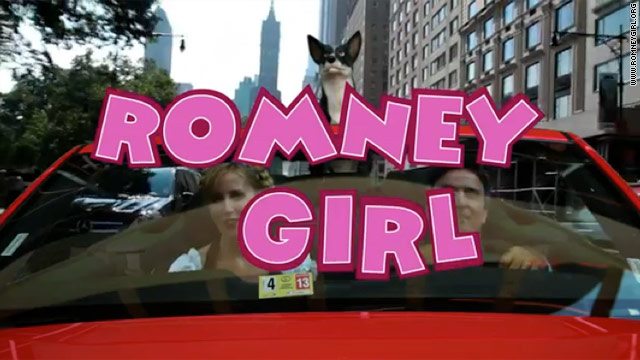 Another viral video: 'Romney Girl' goes for a 'fantastic' ride

On Tuesday, a video parody of Gotye's recent hit "Somebody that I used to know" generated buzz with a video harping on Obama for not fulfilling the promise of his 2008 campaign.

"Romney Girl" features a man, presumed to be the presumptive GOP nominee, dressed in a classic blue suit and coiffed hair, with a woman, "Miss Swiss," clad in the stereotypical, classic Swiss dirndl. The music video follows the storyline of the original "Barbie Girl" song with a woman hopping into male character's convertible to head off gallivanting.

The video begins with a play on the original "Barbie Girl" dialogue:

"Do you have something to hide?" asks the woman.

Miss Swiss then sings, "I'm a Romney girl, in a Romney world. Life is tax-less. It's fantastic. Silver tip your hair, tax shelters everywhere, Outsource nation, Bain is his creation."

The creators of "Romney Girl" have developed a narrative for the Swiss woman.

According to the website, she is "Harry Reid's secret source" from Bain Capital-Romney's private equity firm prior to running for governor of Massachusetts–and "she first met Mitt Romney, who would frequently show up to the bank unannounced and throw $100 bills up in the air while shouting, 'Thank God for Amnesty!'"

Last week, Senate Majority Leader Harry Reid claimed Romney has not been paying taxes according to an unnamed source who was an investor with Bain. The powerful Democrat has not backed down on his claims or demand that Romney release more tax returns.

So far, Romney has released his tax returns from 2010 and an estimate for 2011, and has remained firm on his plans not release any more years of tax documents.

The website–which should be noted, features a pink theme with a moving glittery background–highlights a variety of statistics slamming Romney for his wealth, including the reported $77,000 price tag on caring for his wife's dressage horse, Rafalca, and polling numbers of Americans who think the Republican candidate should release his tax returns.

Furthermore, the website also has a twitter account for @realromneygirl as well as a slideshow with altered pictures of "Romney Girl" 'posing' with major Republican politicos.

"In 2010, Miss Swiss left Geneva (after safely depositing all of her own money into a Swiss bank account) and moved to Searchlight, Nevada, where she joined a small Swiss expat community of retired yodelers and milkmaids. It was there she bumped into Senate Majority Leader Harry Reid while burning his book "The Good Fight" during a local sheep-shearing festival. Miss Swiss told Senator Reid about Mr. Romney's tax avoidance "because I thought it was so funny that a Senator would actually think that rich people pay taxes! So silly!"

The video was created by the progressive policy organization, the Agenda Project Action Fund. And one of the executive producers of the music video, Erica Payne, was the Deputy National Finance Director for the Democratic National Committee during then-president Bill Clinton's 1996 re-election campaign.