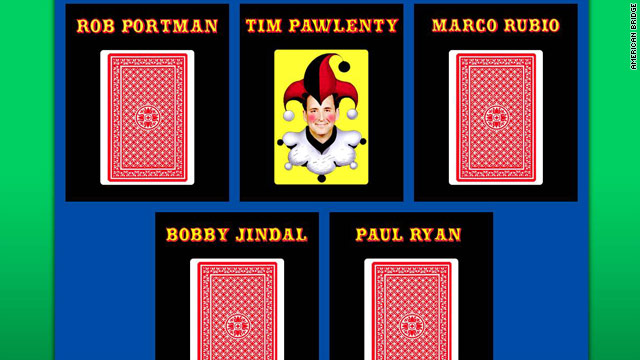 (CNN) – Mitt Romney may be playing his vice presidential pick close to the vest, but a Democratic group is gambling on five potential running mates who they've already labeled "deeply flawed."

"During the 2012 GOP presidential primary, the Republican base tried as hard as they could to nominate anyone-but-Romney," the group writes on the website. "Just as Mitt was the best they could muster for the party's standard bearer, their choices to fill the rest of the ticket aren't much better. Four years after Sarah Palin, Republicans are once again poised to put forward a deeply flawed candidate as their vice presidential nominee."

The potential vice presidential candidates are presented as playing cards. When you click on a card, a wealth of opposition research pops up, with a summary of why the group opposes that candidate.

Of Rubio, American Bridge writes: "Once Rubio is revealed to be neither the Tea Party champion or draw for Hispanic voters that Romney is counting on, what's left is an inexperienced freshman Senator who brings little to the ticket."

The assessment of Portman, the former budget director for President George W. Bush, isn't much better: "The selection of Rob Portman would be further proof that a Romney administration would just be a more extreme conservative revival of George W. Bush's policies."

Romney and his campaign have been tight lipped on their choice for running mate. Romney has only offered that he will announce his pick before the third day of the Republican National Convention in Tampa.

Obama's campaign jokingly said Wednesday that they were rooting for two names not on American Bridge's list of potential running mates.

"We all think Newt Gingrich or Michele Bachmann would be an excellent choice for Mitt Romney to choose," Obama campaign spokeswoman Jen Psaki said aboard Air Force One as the president traveled to a campaign stop in Colorado.

Psaki continued, "No, obviously, the campaign is - we are closely watching. We don't know any more than you do about the day and who it will be."

No matter which name Romney chooses, Psaki said, the Democrats would be prepared "to tell you why that person may be a bad choice for middle-class families."