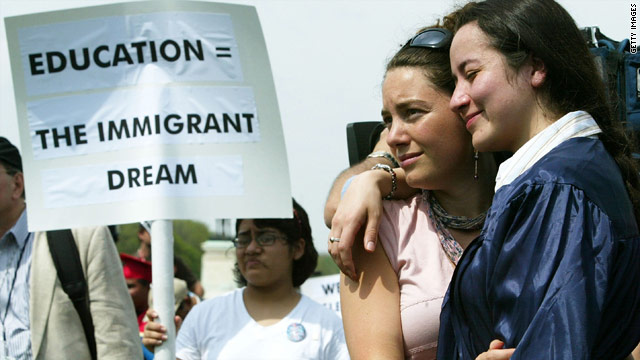 Democrats push for inclusion of DREAM Act in party platform

(CNN) - Rep. Martin Heinrich, who is battling for a U.S. Senate seat in New Mexico, joined other Senate candidates Thursday urging the Democratic Party to include the DREAM Act in its convention platform.

While Democratic lawmakers have long pushed for the DREAM Act to become law, the measure has failed to pass through Congress, despite many attempts. The proposal calls for permanent residency status for some young adults who were brought to the country illegally, as long they meet certain requirements that among others include working towards a post-secondary degree or serving in the military.

President Barack Obama in June announced the administration would stop deporting some young illegal immigrants, specifically those who meet similar criteria found in the DREAM Act. Under the new policy, people younger than 30 who came to the United States before the age of 16, pose no criminal or security threat, and were successful students or served in the military can get a two-year deferral from deportation.

The policy was met with much opposition from the Republican Party, with many of its members saying the ruling offered only a short-term solution and that they prefer to see major immigration policy changes happen through legislation, rather than directives issued by the executive branch.

At the time, Sen. Marco Rubio of Florida was in the process of drafting what many called the GOP version of the DREAM Act, which modeled similar provisions from the Democratic-backed legislation but would not include a path to citizenship.

Presumptive GOP presidential nominee Mitt Romney has said he would veto the DREAM Act as president, but has expressed support for legal status for those who serve in the military, only. But he has also not said whether or not he would repeal the recent Obama administration directive.

While the DREAM Act is currently not an official plank in the Democratic Party platform, the party has long been vocal about its support for more progressive immigration reform.

"We support a system that requires undocumented immigrants who are in good standing to pay a fine, pay taxes, learn English, and go to the back of the line for the opportunity to become citizens," the platform currently states. "They are our neighbors, and we can help them become full tax-paying, law-abiding, productive members of society."

The platform committee will hold a public meeting Saturday in Detroit. At the hearing, chaired by Newark Mayor Cory Booker and Lt. Gen. Claudia Kennedy, the 120 committee members will submit amendments to be discussed before being put forth for a vote.

The final document will be presented to delegates at the Democratic National Convention in Charlotte, North Carolina this September. Those present will then vote to accept it as the official party platform.

Other Senate candidates pushing for the party to adopt the legislation include Shelley Berkley in Nevada and Richard Carmona in Arizona. While Heinrich said Thursday he's been greeted with strong support for including the proposal, the Democratic National Committee would not say whether or not the measure would likely make it into the platform.

"The platform process is ongoing but the President and Democrats support the DREAM Act and are committed to taking steps toward passing it," DNC spokeswoman Melanie Roussell said in a statement.

While immigration reform can be a fiery election-year topic, polls consistently show that immigration issues rank low on Hispanic voters' minds. According to a Gallup survey released late June, 12% of Hispanic voters rated it as the top priority, while health care trended as the top issue, followed by unemployment and economic growth.