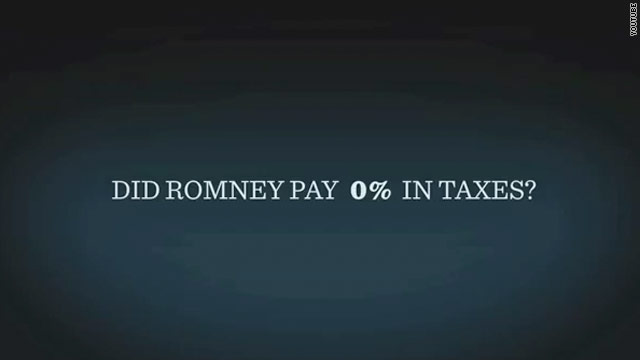 The 30-second ad, "Son of Boss," points to an op-ed published on CNN.com that was written by two tax experts, who claim Romney was involved with the reporting of a $70 million fictional tax loss when he served on the board of Marriott International from 1993 to 1998.

"During that period," the op-ed states. "Marriott engaged in a series of complex and high-profile maneuvers, including 'Son of Boss,' a notoriously abusive prepackaged tax shelter that investment banks and accounting firms marketed to corporations such as Marriott."

While Romney did not face criminal charges, unlike others linked to the scandal, the authors wrote "his endorsement of this stratagem provides insight into Romney's professional ethics and attitude toward tax compliance obligations."

Responding to the ad, Romney's campaign said Obama's team has "doubled down with another dishonorable and dishonest attack."

"In 2008, candidate Obama said ‘you make a big election about small things’ when you don’t have a record to run on. Since President Obama can’t run on record unemployment, falling incomes, and massive debt, he has decided to run a dirty campaign that is an affront to everything he claims to stand for,” Romney spokeswoman Amanda Henneberg said in a statement.

In its new television commercial, the Obama campaign reiterates its call for Romney to release more tax returns and asks, "Isn't it time for Romney to come clean?" The campaign and top Democrats have raised questions about the candidate's reported offshore investments and overseas accounts in countries known as tax havens for Americans.

The Republican candidate, whose estimated worth is valued up to $256 million, has made public his tax return for 2010 and an estimate for 2011, with a pledge to release the full year once the documents are complete. He filed an extension for October.

While Romney says he will not release further taxes than what he has already made public, a majority of Americans disagree with his decision. According to a CNN/ORC International poll released Thursday, 63% of Americans said Romney should release additional tax returns.

Responding to the allegations, Romney has staunchly denied the claims, even calling on the top Democrat to either "put up or shut up." In the wake of the controversy, Romney firmly said he paid his taxes in full.

"I have paid taxes every year. And a lot of taxes. A lot of taxes," Romney said Friday at a press conference in Nevada. "So Harry is simply wrong."

But that didn't stop Obama's team from pounding Romney again this week over the tax issue. The new ad also points to an ABC News interview, in which he was asked if he's ever paid a tax rate lower than 13.9%, his rate for 2010.

"I haven't calculated that. I'm happy to go back and look," Romney said.

Team Obama said the ad will run in the same states that Romney's bus tour will cross in the coming week, including Virginia, North Carolina, Florida and Ohio–all battleground states.