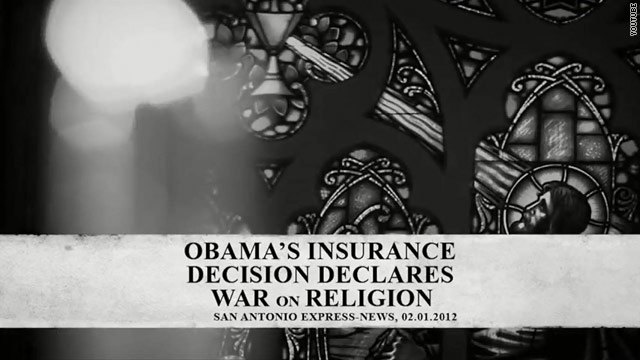 (CNN) – After weeks of attacking President Barack Obama's economic record, Mitt Romney took a sharply different tack Thursday in his latest television ad, going after the president for policies the Republican challenger amounts to a "war on religion."

In the spot, which also features footage from Romney's trip in July to Poland, an announcer says Obama's heath care law forces religious institutions to "go against their faith."

In a press release that accompanied the ad, the campaign justifies the "war on religion" claim using an editorial published in the San Antonio Express News in February, as a political firestorm waged over a controversial federal rule requiring employers cover contraception in their health insurance plans.

After uproar from conservatives and religious groups, Obama announced an accommodation to the rule on February 10. Under the new plan, religiously affiliated universities and hospitals will not be forced to offer contraception coverage to their employees. Insurers will be required, however, to offer complete coverage free of charge to any women who work at such institutions.

A poll taken in March by the Public Religion Research Institute showed a majority of Americans - 54% - said religiously affiliated colleges and universities should be required to provide employees with health care plans that cover contraception.

Romney's thirty-second ad, titled "Be Not Afraid," does not directly reference the contraception rule, or the subsequent accommodation from the Obama adminstration.

After the "war on religion" segment, the ad uses a clip of Romney speaking in Poland.

"In 1979, a son of Poland, Pope John Paul II, spoke words that would bring down an empire: 'Be not afraid,'" Romney is showed saying.

"When religious freedom is threatened, who do you want to stand with?" the announcer asks.

Romney's speech in Warsaw marked his last public remarks on a week long, three-country foreign swing in July that was meant to bolster his foreign policy credentials. The trip also brought the candidate to London and Israel - two stops marred by stumbles, including a suggestion that the organizers of the London Olympics were ill prepared to host the 2012 Games. In Israel, his remarks in support of the Jewish state provoked an angry response from Palestinian leaders. But his stop in Poland was largely free of any major gaffe from the candidate.

In Thursday's ad, Romney is shown meeting with Lech Walesa, the shipyard worker who went on to inspire the Solidarity trade union and the eventual fall of the Iron Curtain. When Romney was in Poland, Walesa effectively endorsed him for president.

Romney's ad Thursday could be seen as a direct appeal to Catholic voters, who according to national exit polls went for Obama over Sen. John McCain in 2008 54%-45%. Organizations of Catholic bishops have led the charge against the contraception provision in Obama's heath care law.

Obama, who was campaigning in Colorado Wednesday, also subtly harkened back to February's debate over contraception. He was introduced by Georgetown University Law Center graduate Sandra Fluke, who was at the center of the controversy earlier this year after testifying to Congress about the importance of providing birth control to employees of religiously affiliated institutions.

Responding to the Romney ad, an Obama spokeswoman defended the president's contraception stance.

“President Obama believes that, in 2012, women should have access to free contraception as part of their health insurance, and he has done so in a way that respects religious liberty," Lis Smith wrote. "Churches are completely exempt and religiously affiliated organizations that object to providing the service will never have to pay for contraception. Mitt Romney apparently disagrees with this approach and it’s no surprise why. He has pledged to ‘get rid of’ of federal funding for Planned Parenthood and would take women’s health back to the 1950’s. Women can’t afford his extreme policies."