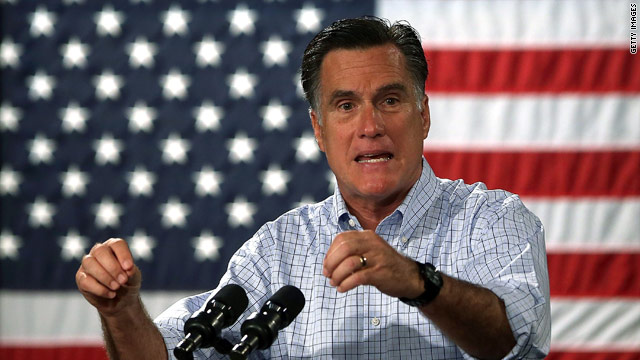 "I am seeing some of the ads out there," Romney said on the Bill Bennett Morning Show on Thursday. "I don't know whatever happened to a campaign of 'hope and change.' I thought he was a new kind of politician. Instead his campaign and the people working with him have focused almost exclusively on personal attacks."

Romney tore into the Priorities USA Action ad, released Tuesday, that ties him to the death of a former GST Steel worker's wife after the employee lost his job when the plant closed down. Romney's former private equity firm, Bain Capital, acquired GST Steel in 1993, but the company went bankrupt in 2001, two years after Romney ceased day-to-day oversight of Bain.

The ad was deemed "inaccurate" by a CNN fact check, which pointed out the wife of the steel worker died in 2006, five years after the plant shut down.

"You know, in the past, when people pointed out that something was inaccurate, why, campaigns pulled the ad," Romney said on the Bill Bennett radio show. "They were embarrassed. Today, they just blast ahead. You know, the various fact checkers look at some of these charges in the Obama ads and they say that they're wrong and inaccurate, and yet he just keeps on running them."

One of Romney's campaign ads released this week, which blasts Obama for changes to welfare, was also deemed "inaccurate" by several independent fact checks, including a rating of "pants of fire" from Politifact. Romney did not mention those fact checks on Thursday.

Bill Burton, the co-founder of Priorities USA Action, said Wednesday he "absolutely" stood by the spot.

The uproar created by the Priorities USA commercial has led to numerous airings on cable news, but the spot has yet to run as a paid commercial on television.

The group Tuesday said the ad, titled "Understands," was part of their current $20 million television and online buy, and that the 60-second spot would run in the battleground states of Iowa, Florida, Pennsylvania, Virginia and Ohio.

Burton wouldn't say on CNN Wednesday how much of that $20 million would be spent airing "Understands."

"Well, you know, it depends," Burton said. "Every ad is a little bit different. Sometimes you think that you want to keep an ad on longer, and so you do."

CNN's Brianna Keilar and Paul Steinhauser contributed to this report.